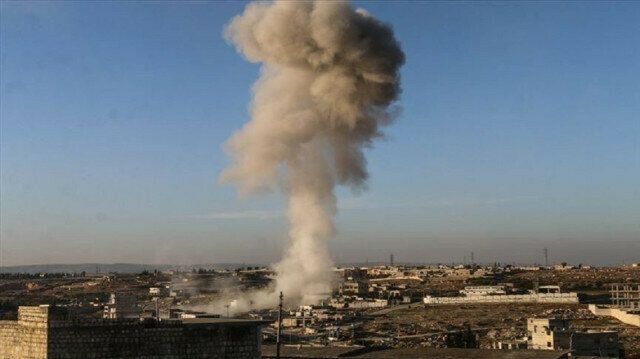 Three civilians were injured Saturday by Russian airstrikes in Syria's opposition-held Idlib province, near the Turkish border, according to civil defense sources in the region.
The attacks, which an opposition plane observatory claimed were carried out by Russia, targeted the villages of Sarja, Mantef, and Ruwaiha in the northwestern Idlib province.
After taking off from Khmeimim Base in the Latakia province at 5.40 p.m. (1040EST), Russian warplanes carried out 12 airstrikes, claimed the observatory.
Three civilians were injured, said Syria’s civil defense forces.
An Anadolu Agency correspondent at the scene transported a child injured in the attacks to the hospital.
Earlier in the day, regime forces and allied terrorist groups launched missile attacks on the villages of Kafr Latah, Kafar Aweed, Deir Sunbul, Al-Magarah, Mareian, Fleifel, Sufuhon, and Benin south of the Idlib province.
Syria has been mired in a vicious civil war since early 2011, when the Bashar al-Assad regime cracked down on pro-democracy protests with unexpected ferocity.
Over the past decade, around half a million people have been killed and more than 12 million had to flee their homes.
Idlib falls within a de-escalation zone forged under an agreement between Turkey and Russia in March 2020. The Syrian regime, however, has consistently violated the terms of the cease-fire, launching frequent attacks inside the de-escalation zone.