The US Navy set off explosives next to its new aircraft carrier to see if the ship can handle the shock - ednews.net

Kremlin may use Belarusian army in the military confrontation with NATO - Expert
Read: 250

The US Navy's new supercarrier is going through shock trials, and that means setting off live explosives near the warship to simulate actual combat conditions.
USS Gerald R. Ford (CVN-78), the first of a new class of aircraft carriers, completed the first explosive event of the ongoing full-ship shock trials on Friday off the US East Coast, where the Navy detonated explosives near the carrier.
The Navy said the carrier was "designed using advanced computer modeling methods, testing, and analysis to ensure the ship is hardened to withstand battle conditions, and these shock trials provide data used in validating the shock hardness of the ship."
The official Twitter account for USS Gerald R. Ford tweeted Saturday that "the leadership and the crew demonstrated Navy readiness fighting through the shock, proving our warship can 'take a hit' and continue our mission on the cutting edge of naval aviation."
Though the Navy has conducted shock trials with other vessels, the latest trials with the Ford, the service's newest and most advanced carrier, mark the first time since 1987 the Navy has conducted shock trials with an aircraft carrier.
The last aircraft carrier shock trials involved the Nimitz-class aircraft carrier USS Theodore Roosevelt, according to the Navy.
Shock trials are designed to test how Navy warships hold up against severe vibrations and identify potential shock-related vulnerabilities in a combat vessel.
A 2007 study, sponsored by the Office of Naval Research and conducted by the MITRE Corporation's JASON program, said US Navy shock trials have their origins in observations from the Second World War. 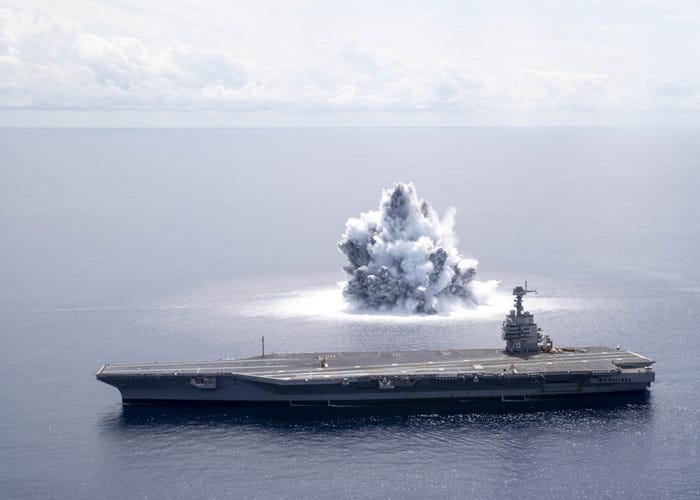