Russia sends series of proposals to US on how to stabilise relations | Eurasia Diary - ednews.net 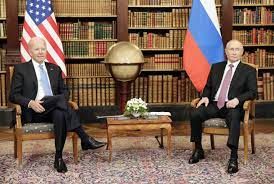 Russian Ambassador to the US Anatoly Antonov returned to Washington, DC, on 20 June following last week's first meeting between presidents Joe Biden and Vladimir Putin, in which the heads of state agreed to send the nations' respective ambassadors back to their missions, Eurasia Diary reports citing Sputnik.

Russia has sent a series of proposals to the US on how both countries can stabilise bilateral relations, Russian Ambassador Antonov said on Monday.

"Today I sent a number of requests and addresses to various US organisations to meet with the leadership of different structures, to discuss what we should do together to implement the positive mood that we think we took from the summit of our two presidents, [the mood for]... stabilisation of Russian-American relations, which will allow us to talk about improving these bilateral ties in the future", Antonov told reporters.

He also added that the overall improvement of bilateral relations with the US depends on the political will in Washington. Moreover, Antonov emphasised that Russia is set to constructively build towards equal, pragmatic relations with America.

"Today everything depends on the political will of the United States - whether it is ready to implement those positive words that were said by our two presidents in Geneva", Antonov stressed.

He underscored Russia's "constructive disposition" to build "equal and pragmatic" relations with the US.

According to the ambassador, in the coming days, Russia hopes to discuss with the US how to implement the provisions of the strategic stability statement. And talks with US counterparts on visa issues will resume in the near future.

"We managed to get in touch with colleagues from the State Department today, and specific meetings will take place in the coming days. Let's wait, I think it will take a little time, and we will already be able to talk about specific results", he said.

Moreover, he stated that Moscow has raised the security equation in Russia-US relations.

Antonov returned to the US after three months of discussions in Russia. His American colleague John Sullivan is set to fly to Moscow later this week.

Upon his arrival in the US, Antonov stressed that Russian diplomats in the country were ready to mend bilateral relations. The diplomat said he will begin scheduling meetings with his US counterparts on Monday to discuss a number of problems raised by the two countries' presidents during the Geneva conference last Wednesday.

Biden and Putin met in person for the first time in ten years in Geneva, Switzerland, at a historic summit where they discussed a wide range of bilateral and global issues and inked an agreement on the necessity of the nuclear superpowers to maintain global strategic stability.

In April, the US imposed sanctions on 32 Russian businesses and persons as part of a new round of sanctions in response to Moscow's alleged cyberattacks and other unfriendly conduct against American interests. Ten Russian diplomats were also expelled from the country, and US entities were barred from purchasing rouble-based bonds.

The accusations made by the Biden administration have been dismissed by Moscow as unfounded.

The Russian Foreign Ministry has since slammed the new wave of sanctions, saying they are counterproductive to both countries' interests. Russia retaliated by barring eight Americans from entering the country and declaring ten US embassy staff unwelcome.

A sharp deterioration in relations between the two superpowers came after Biden's agreement with a journalist's description of Putin as a "killer" who will be forced to "pay a price" for Russia's alleged intervention in the 2020 US elections. Those comments caused Russia to recall its ambassador to the US for consultations, but Putin personally dismissed the remarks, wishing Biden well.