daily news
Turkey's exports reach all-time high with $21.5B in November
Iran presents 2 drafts to P4+1 on sanctions, commitments
Expression of gratitude to Umud Mirzayev by the Chairman of the Press Council - Thanks to his personal contacts...
Azerbaijan's victory will pave the way for stability and prosperity in the entire Caucasus region - Ahmad Abdo Tarabik - VIDEO
OSCE called on Armenia and Azerbaijan to agree on long-term peace agreement
Erdogan, Abu Dhabi crown prince discuss bilateral relations, regional issues
Concept of peace for the sake of culture is key tool for achieving lasting peace in this region - UN High Representative
Azerbaijan ready for long-term peace and interested in ensuring sustainable development in region - Anar Karimov 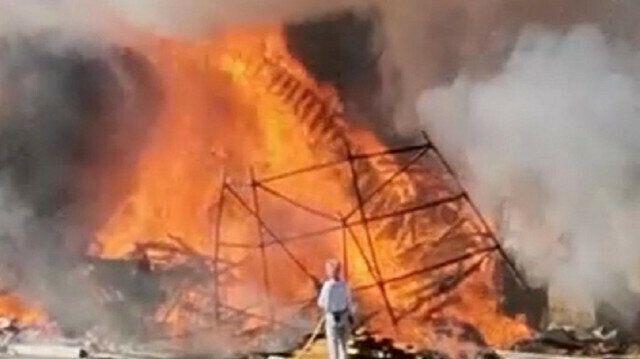 A forest fire which broke out in Turkey's southwestern Mugla province on Sunday has been brought under control, said a local official.
"The fire is now under control. Teams continue cooling work from air and land in the region," Orhan Tavli, the Mugla governor, told Anadolu Agency.
For reasons unknown, the fire broke out in forestland close to hotels and settlements in Icmeler in the Marmaris district of the coastal province.
Many forest workers and firefighters as well as six helicopters, sprinklers, bulldozers, and water tankers battled flames that the wind helped quickly spread over the region.
A forest worker died while battling the forest fires along with firefighters, Talvi also said.
According to Mugla Regional Directorate of Forestry, the forest worker was 38-year-old Gorkem Hasdemir.
Vice President Fuat Oktay on Twitter shared a message of condolences over Hasdemir’s death and wished Allah's mercy on him.