US embassy in Baghdad targeted in drone attack - ednews.net

US embassy in Baghdad targeted in drone attack 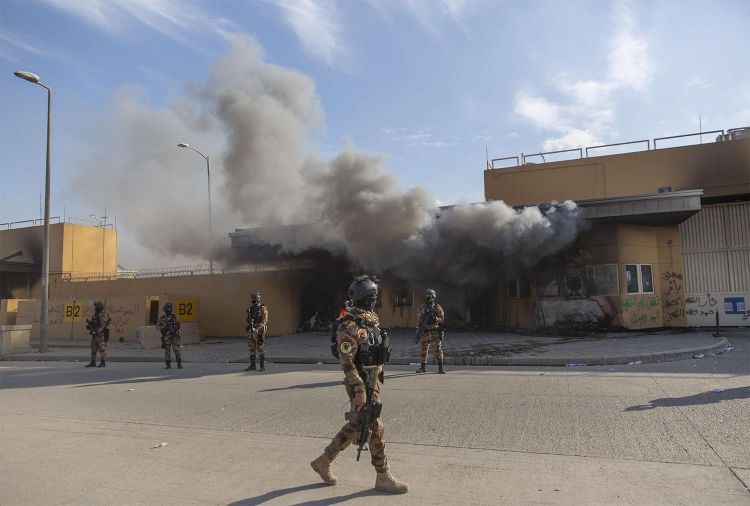 MISSILES were fired at the US embassy in Baghdad yesterday, in the latest attack on Washington’s occupation forces in Iraq since they killed four anti-Isis fighters and a child last week.
“Early on the morning of July 6, defensive systems at the US embassy compound in Baghdad engaged and eliminated an airborne threat,” the embassy confirmed in a statement.
No casualties were reported after the facility was targeted by several drones, which activated anti-aircraft systems.
Sources differ on what happened, with some contradicting the embassy statement by claiming that the anti-aircraft fire had failed to bring down the drones.
Iraq’s Sabereen News said that a “bomb-laden drone” had hit an area inside the embassy’s military compound.
The attack took place the day after the Ain al-Assad air base, which houses US military forces and trainers, was targeted with a barrage of rockets.
Colonel Wayne Marotto said that the attack on the base in Anbar province had not caused any casualties.
It is not clear who was responsible for firing the rockets, but resistance groups have vowed to continue their fight until all US occupation troops leave the region.
Last year, the Iraqi parliament voted unanimously to expel all US forces from the country following the assassination of Iranian Quds Force commander General Qassim Soleimani in a drone strike at Baghdad international airport.
On Monday, newly appointed Russian ambassador Elbrus Kutrashev described the continued US presence in Iraq as “a big problem” which could lead to long-term trouble.
And, speaking in a rare and exclusive interview with the Associated Press (AP) news agency, the leader of the Iranian-backed Kataib Sayyid al-Shuhada militia described the current situation as “an open war.”
Abu Alaa al-Walae vowed to take revenge for a US drone strike last week that killed four members of the state-sponsored Popular Mobilisation Forces militia alliance.
“We want an operation that befits those martyrs, even if it comes late. Time is not important,” he said.