Biden to speak on Afghanistan amid US troop withdrawal and Taliban gains - ednews.net 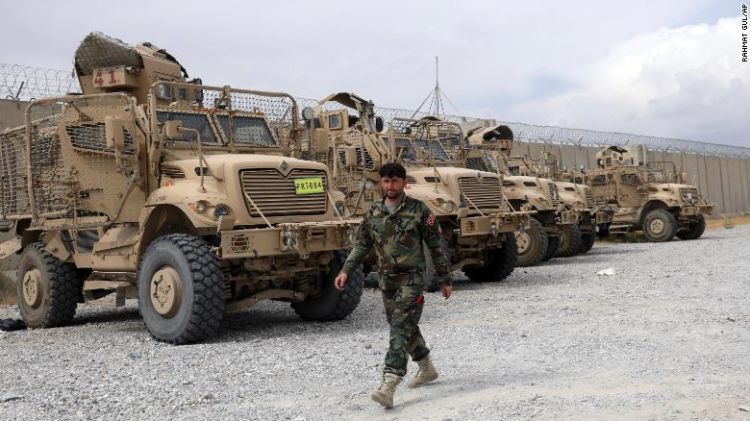 President Joe Biden will receive an update Thursday on the swiftly concluding war in Afghanistan, where a near-complete withdrawal of American troops is coinciding with major Taliban gains.
Facing the prospect of a Taliban takeover within a year -- accompanied, most likely, by devastation and suffering -- Biden hopes to convey continued support for the country. White House officials say he will detail US security and humanitarian assistance that will carry on once the troop presence ends.
But the deteriorating security situation, while troubling, has not deterred Biden from pushing ahead with his plans to bring US troops home.
Instead, the pace with which the Taliban have gained ground in recent weeks has, in a way, only solidified for the White House the merits of Biden's decision, according to multiple officials, who said it has made clear the limited value of a long-term force presence.
The morning briefing from members of his national security team in the White House Situation Room will come ahead of public remarks from the President about the US role going forward in Afghanistan. He will deliver them from the East Room.
Last week, Biden bristled under questioning on Afghanistan, saying he'd rather discuss the matter after the July 4 holiday.
"It's a rational drawdown with our allies -- there's nothing unusual about it," Biden said on Friday of the pace of withdrawal, which has caught some in Washington by surprise.
He said he had faith in the civilian leaders in Kabul, whom he met in the Oval Office last month, despite American intelligence assessments the capital could fall to the Taliban in as little as six months after US troops depart. But he said the fractious divides within the government must be resolved.
"I am concerned that they deal with the internal issues that they have to be able to generate the kind of support they need nationwide to maintain the government," Biden said.
The withdrawal has proceeded quickly after Biden announced in April he would wind down America's presence in Afghanistan by September 11, the twentieth anniversary of the terror attacks that prompted the war.
Officials recently began citing an earlier date -- late August -- by which the last remaining troops would exit the country, with a small contingent left behind to protect diplomatic facilities.
The withdrawal is now more than 90% complete, officials say. The last US troops left Bagram Air Base last week, marking the end of the American presence at the sprawling compound that became the center of military power in Afghanistan.
Some Afghan soldiers told CNN they only found out the Americans were leaving that very day. And Afghan officials accompanying CNN on a tour of Bagram on Monday confessed they were only then getting access to much of the base and working out what had been left behind.
One senior officer said he was notified last Thursday that his forces had less than 24 hours to secure the perimeter of the base.
US intelligence services, military commanders and members of Congress have all warned that the Afghan government won't be able to stand up to the Taliban without the backing of American firepower. The Taliban are already moving rapidly to take over districts in the northern parts of Afghanistan, leading US military commanders to raise the prospect of a civil war once US troops are gone.
Other big decisions have yet to be made, including whether and how the US will use drones in the future to target suspected terrorists in Afghanistan, how to secure the civilian airport in Kabul and how exactly to ensure the safe passage of Afghan translators and other workers who assisted American forces during the war and are now targets for the Taliban.
Biden has vowed to allow those who helped the US effort to come to the United States, but the visa process has been slow, leading officials to develop plans to relocate them to a third country.