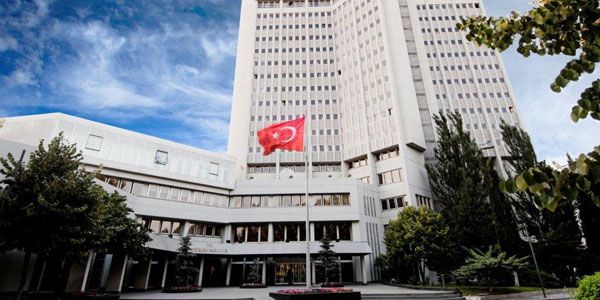 Turkey's Foreign Ministry said Tuesday that a statement by the European Union’s foreign policy chief on the Turkish president's recent visit to the Turkish Republic of Northern Cyprus (TRNC) is fresh proof of the bloc's disconnect from the truth on the Cyprus issue, Eurasia Diary reports citing Anadolu Agency.

In a statement, Foreign Ministry spokesperson Tanju Bilgic cited Josep Borrell's remarks on the visit by Recep Tayyip Erdogan to the TRNC.

The remarks, made solely for the sake of EU solidarity and which are null and void for Turkey, do not go beyond being those of the spokesperson and advocate of the Greek Cypriot administration and Greece, which abuse their veto right in the EU, he noted.

Bilgic went on to say that it is not possible for the EU to play any positive role in the resolution of the Cyprus issue with this attitude.

Emphasizing that the TRNC has Turkey’s full support for its decisions regarding the town of Maras, he said these decisions aim to protect the rights of property owners in the town, as Erdogan has stated that the decisions will not create new grievances but will eliminate old ones.

Bilgic also called on the EU to see the realities in Cyprus and to end the policy of ignoring the Turkish Cypriots and their rights.

Touching further on Maras, which was partially reopened to the public in 2020 after 47 years, Tatar stressed that this decision was an "extremely important initiative" that will enable the return of former residents and the rightful holders of properties, who have not been able to go to their properties for years.

In 1974, a Greek Cypriot coup aiming at Greece's annexation led to Turkey's military intervention as a guarantor power to protect Turkish Cypriots from persecution and violence.

It has seen an on-and-off peace process in recent years, including a failed 2017 initiative in Switzerland under the auspices of guarantor countries Turkey, Greece and the UK.

The Greek Cypriot administration entered the European Union in 2004, the same year that Greek Cypriots thwarted a UN plan to end the decades-long dispute.