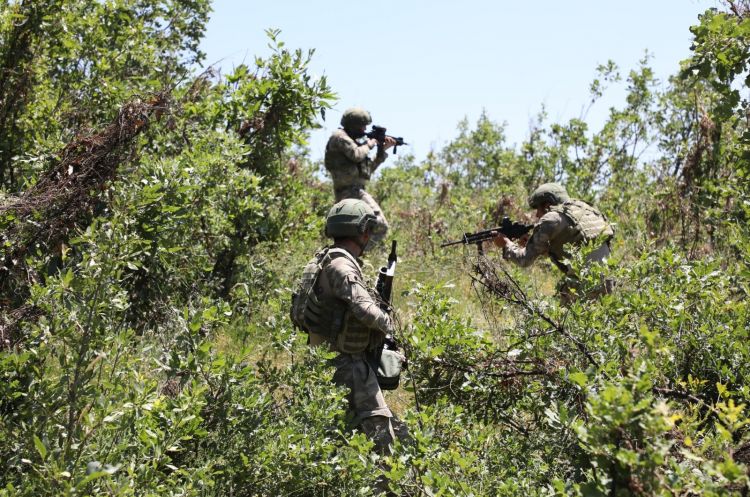 Turkish security forces have eliminated the PKK terrorist group's so-called logistical head in northern Iraq's Hakurk region in a joint operation conducted with National Intelligence Organization (MIT), security sources said Monday.
Hakan Ateş, codenamed Serdar Pir Avesta, who has been operating in northern Iraq since June 2015, was active in the so-called Patriotic Revolutionary Youth Movement (YDG-H), a PKK offshoot, and personally involved in the terror group's activities and recruitment affairs.
Ateş, who was responsible for the logistics activities of the PKK in the Hakurk region, was also among the most trusted names of the terrorist group.
According to the information received from security sources, the MIT surveilled Ateş in northern Iraq and identified a secret area used by PKK terrorists.
Ateş was killed in an operation carried out on 22 June near the Birkim village of Hakurk in Iraq.
Turkey's Defense Ministry also stated Monday that 2 more PKK terrorists in northern Iraq were killed in new operations.
The ministry added that the country's fight against terrorism and terrorists continues uninterruptedly and decisively.
Turkish security forces have ramped up their efforts against the PKK terrorists at home and across the country's borders and have been carrying out successful operations to eliminate senior terrorists.
Determined to eliminate terrorism at its source, Turkey is throttling the terrorist group in northern Iraq. Northern Iraq is known to have many PKK terrorist hideouts and bases from where they carry out attacks in Turkey.
The Turkish military regularly conducts cross-border operations in northern Iraq. Turkey has long been stressing that it will not tolerate terrorist threats posed against its national security and has called on Iraqi officials to take the necessary steps to eliminate the terrorist group. Ankara previously noted that if the expected steps were not taken, it would not shy away from targeting terrorist threats.
The PKK targets are being struck in the Metina, Avashin-Basyan, Zap and Qandil regions. In addition to F-16 fighter jets, border artillery units, fire support elements in the forward base areas and attack helicopters are participating in the operation.
Recently, a terrorist named Hasan Adır, who was allegedly the senior figure responsible for the Sulaymaniyah area in northern Iraq, was killed in an MIT operation in the area.
In June, the PKK terrorist group’s so-called Makhmour regional leader in northern Iraq code-named “Doctor Hüseyin” was eliminated in a joint operation by the MIT.
Announcing the operation, Turkish President Recep Tayyip Erdoğan said that Turkey would not allow the "treacherous and separatist organization" to use Iraq's Makhmour district as an "incubation center" for terrorism. "We will continue to eradicate terrorism at its source," he stressed.
Turkish intelligence discovered that the camp was as important as Qandil for the PKK terrorists and that they were recruiting and training members for their activities under the guise of the camp. The Qandil Mountains in northern Iraq are the PKK's stronghold and the group is active in many cities and towns. It occupies a large number of villages in the region and launches attacks on Turkey's interior from here.
In response, the PKK terrorist group has recently increased multifaceted terrorist attacks by targeting legitimate representatives of the Kurdish people in northern Iraq including Peshmerga forces and police officers, kidnapping civilians, targeting diplomatic missions and inciting peaceful protests to violence in the Iraqi Kurdish Regional Government (KRG).
The PKK also accuses the Irbil administration of collaborating with Turkey in its successful anti-terror operations in northern Iraq and is attacking Peshmerga forces in the KRG.
It was also reported that the PKK terrorist group sends members from Europe to northern Iraq to disrupt the stability and peace in the region.
The terrorist group has also tried to establish a strong presence in Turkey’s eastern and southeastern provinces.
In recent years, however, record numbers of PKK terrorists have been surrendering thanks to Turkey's determined domestic and cross-border counterterrorism operations.
The dissolution of the PKK has accelerated due to Turkey's successful counterterrorism operations and strategies both at home and abroad. In recent years, Turkey has seen record numbers of PKK terrorists giving themselves up in the face of determined domestic and cross-border anti-terror operations.
The PKK, which is listed as a terrorist organization by Turkey, the United States and the European Union, has waged a terror campaign against Turkey for more than four decades and has been responsible for the deaths of nearly 40,000 people, including women and children.