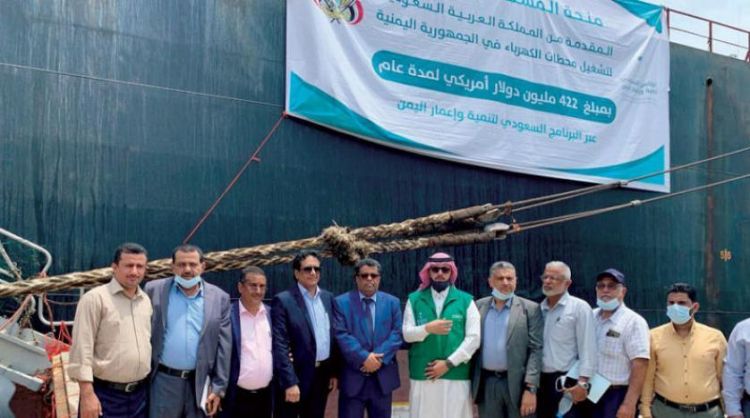 The grant is the latest in a series of aid packages worth over $4 billion presented by Saudi Arabia to Yemen. The neighboring Kingdom had allocated a $422 million fuel grant based on requests by Yemen’s Ministry of Electricity and Energy.

Sent with the help of the SDPRY, the third shipment was received by the Deputy Gov. of Aden Badr Mouaen, first undersecretary of Aden Mohammed Nasr Al-Shathili, SDPRY representative Mohammed Al-Yehya and other officials.

Al-Yehya hoped the third batch will reach the intended beneficiaries and improve the living standards of Yemenis.

For his part, Mouaen reiterated how vital the grant was for reducing power cuts and alleviating the suffering of Yemenis. He pointed out that each of Yemeni President Abdrabbuh Mansur Hadi and Prime Minister Maeen Abdulmalik had ordered using the oil grant to improve the lives of citizens.

Hadi and Abdulmalik, according to Mouaen, recognized that the fuel donation aligns with Saudi Arabia’s established commitment to stand in solidarity with Yemenis in several significant fields, such as national and economic development and humanitarian relief.

Previous batches of the Saudi oil grant in May and June helped increase energy output by more than 25% in Yemeni governorates and more than 40% in Aden and stabilized fuel supplies.

The Saudi grants have reduced the burdens on the Yemeni government’s budget, reduced the depletion of hard currency in purchasing oil derivatives from global markets, stabilized Yemen’s riyal exchange rate and fuel prices against the US dollar, provided job opportunities, raised the productivity of Yemeni citizens, raised the performance of vital sectors and improved the livelihoods of Yemenis.