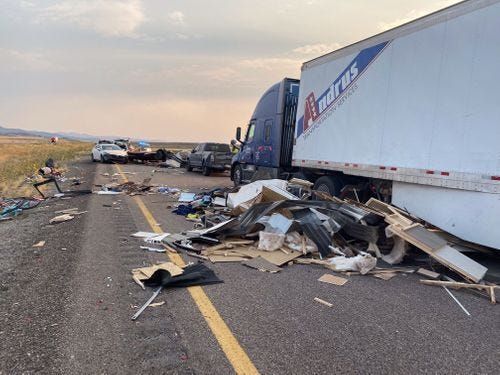 At least seven people were killed and 10 were injured in a series of major crashes on Utah’s Interstate 15 highway Sunday after high winds blanketed the road in sand and dust.
The deadly collisions happened around 4:30 p.m. outside the community of Kanosh, according to a statement from Utah Highway Patrol. Police say strong winds obscured the road with blowing wind and dust at the time, which caused the crash.
Twenty-two vehicles were involved in the crash, including multiple tractor-trailers.
Several children were among the dead, Sgt. Cameron Rhoden told local broadcaster KUTV.
“We have vehicles all over,” Rhoden said. “Several vehicles tried to swerve off the roadway. We have vehicles that are flipped up on their sides.”
Photos show several shattered vehicles scattered around a line of 18-wheelers on the highway. One tractor-trailer appeared to have completely destroyed the back right section of a red sedan.
Rhoden added that one of the vehicles was pulling a trailer and that the trailer has been “pretty much completely destroyed.”
Victims were taken to hospital by air and ground ambulances after the crash. Police have not identified any of the victims.
Police diverted traffic around the scene while they started their investigation, which is expected to take some time.