US decision to leave Iraq worthy of increased attention - Kremlin 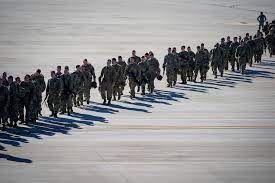 The situation that unfolds after Washington’s decision to end its combat mission in Iraq should be scrutinized, Kremlin spokesman Dmitry Peskov told reporters on Tuesday.
"Undeniably, this is a situation that deserves increased attention. The situation is slightly different in Iraq because it seems that a significant number of military advisers will remain there, they will continue working in Iraq. Therefore, of course, we will monitor [the situation], it is premature to anticipate anything now but we of course would not want another territory to be added to the general regional potential for instability. We should look at it carefully," he said.
Peskov underlined that the situations in Iraq and Afghanistan are different. "It is clear that it [the situation] is very different and it is hardly possible to draw any parallels here. But I reiterate that we all want that no new episodes are added to the general conflict potential in the region," he said.
The Kremlin spokesman also pointed out that this move by Washington did not come as a total surprise to the Kremlin. "There were statements made by US representatives and [US] president’s administration that they should leave Iraq sooner or later, therefore, it is not breaking news," he emphasized.
When asked if there are any forces in Iraq that Russia can potentially engage in talks with considering what is happening in Afghanistan and Moscow’s experience of talks with the Taliban, Peskov said, "First of all, we, of course, aim for further contacts and for development of our relations with the Iraqi government, with the Iraqi authorities. We are interested in this."
US pullback
US President Joe Biden announced on Monday that the American combat mission on Iraq will be ended by the end of 2021, noting however that the bilateral cooperation in the fight against terrorism will continue. The US leader particularly explained that the US will focus on consulting and training local security forces.
On January 5, 2020, the Iraqi parliament adopted a resolution demanding that all foreign forces be fully expelled from the country. In March 2021, Iraqi President Barham Salih said that the number of US military personnel in the country did not exceed 2,500. In April, Iraqi Prime Minister Mustafa al-Kadhimi noted that the improved combat training of the national army and security forces as well as successes in the fight against terrorists make it possible to withdraw up to 60% of the foreign military contingent.