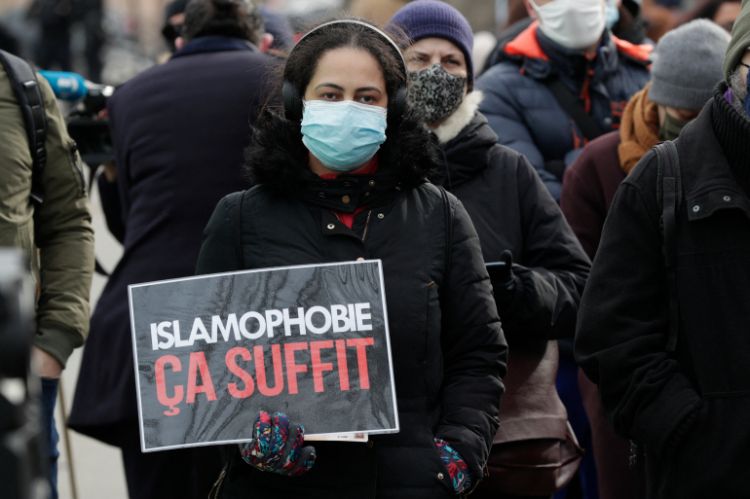 New controversial legislation in France on "reinforcing respect for the principles of the Republic" institutionalized and legalized Islamophobia in the country, a human rights activist said on Wednesday.
"With the passing of the law, Islamophobia was institutionalized and legalized," Maria De Cartena, a member of the Coordination Contre la Loi "Separatisme" (Coordination Against the "Separatism" Law) movement, told Anadolu Agency. "And the reasons for this are very simple: The government's fear of Muslims and its desire to intimidate them," continued De Cartena.
Criticizing the so-called anti-separatism law's clauses as derogatory and restrictive, she argued that it could be seen as a repetition of the Code de l'indigenat, or native code, that French Empire imposed on its colonies, as it "keeps the Muslims in line in terms of their religion, social and cultural activities, as well as their worship, and prevents access to many rights."
Passed last Friday, the law divides French society into two classes, she asserted, with one able benefit from all their constitutional rights, while the other, as second-class citizens, cannot.
Underlining that the law also violates the principle of secularism, De Cartena said that instead of strengthening the principles of the republic, as its name implies, the law actually eliminated the principles of freedom, equality, and fraternity.
Anti-separatism law
Criticized for allegedly targeting France's Muslim community -- the largest in Europe -- and imposing restrictions on many aspects of its members' lives.
The law allows officials to intervene in mosques and associations responsible for their administration, as well as controlling the finances of associations and non-governmental organizations belonging to Muslims.
It also restricts the education choices of Muslims by making homeschooling subject to permission from authorities.
Under the law, patients are prohibited from choosing their doctors based on gender for religious or other reasons, and "secularism education" was made compulsory for all civil servants.
France has been criticized by international organizations and non-governmental organizations, especially the UN, for targeting and marginalizing Muslims with this law.
Since being announced as a bill, attacks on mosques and masjids, including arson, have increased in the country.​​​​​​​