Tatarstan to be 'bridge' for Turkey to enhance trade ties with Russia - ednews.net 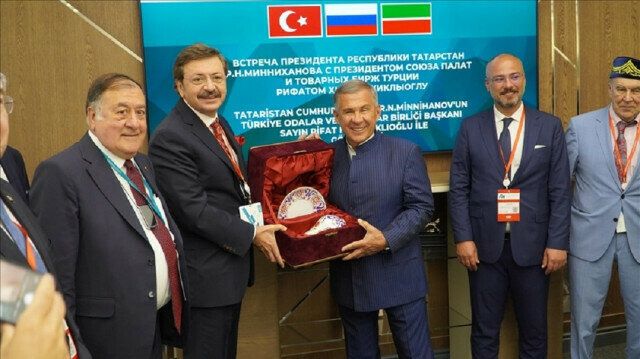 The Russian Republic of Tatarstan will serve as a bridge for Turkey to boost its economic ties with Russia, the head of Turkey's Union of Chambers and Commodity Exchanges (TOBB) said on Wednesday.
Turkish businesspeople led by TOBB head Rifat Hisarciklioglu gathered with Rustam Minnikhanov, Tatarstan's president, as part of the current three-day Kazan Summit 2021, with Anadolu Agency as its global communications partner.
Tatarstan, with a large ethnic Tatar population, attracts the largest amount of Turkish investments in Russia, Hisarciklioglu said, adding: "Tatarstan gets 30% of Turkey's investments in Russia."
Pointing to the Tatarstan government’s "private sector-friendly" approach, Hisarciklioglu said: "We are open to cooperate with Tatar companies in Turkey's first indigenous electric vehicle by TOGG Turkey’s Automobile Initiative Group."
Minnikhanov also highlighted that strong historical ties between the two republics are reflected in bilateral economic and trade ties.
Touting successful Turkish investments in Tatarstan, Minnikhanov said they significantly contributed to boosting foreign trade in the country.
The Kazan Summit 2021, called by organizers one of the leading international economic events of the Russian Federation and the countries of the Organization of Islamic Cooperation (OIC), lasts through Friday.