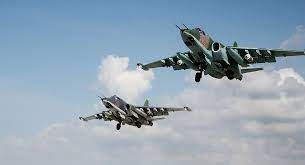 Russian Su-25 aircraft have been deployed from Kyrgyzstan to Tajikistan to participate in military drills near the border with Afghanistan, Russia's Central Military District said on Thursday.
"Su-25 aircraft has been airlifted from the airfield of the Russian military base in Kyrgyzstan to the Gissar airfield in Tajikistan to participate in a trilateral exercise to be held from August 5 to 10 in the Khatlon region at the Harb-Maidon training ground," the district said.
Troops from Russia, Tajikistan and Uzbekistan will participate in the upcoming trilateral drills. The situation in Central Asia has become tense amid the growing activity of the Taliban* radical movement. The militants seized control of Afghanistan's borders and boosted their activity, as US troops are withdrawing from Afghanistan, after an almost 20-year campaign.
Moscow addressed the escalation by redeploying its military forces in Tajikistan closer to the Afghan border, warning that the Collective Security Treaty Organisation would "act decisively" to stop any aggression or provocations on the allied states' borders.
​*The Taliban is a terrorist group banned in Russia and many other nations.