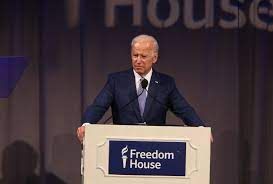 Last month, the Chinese Communist Party celebrated its centenary with all the internal fanfare you would expect. The party, which has ruled China since 1949, touted the Twitter congratulations of world leaders from Russia, Pakistan, Kazakhstan, Egypt, Serbia, and elsewhere lauding its record of supposed social, cultural, economic, and environmental progress.
Of course, the Chinese communists' actual record is quite different — a blunt fact painfully highlighted at last month’s International Religious Freedom Summit in Washington, D.C.
Tursunay Ziyawudun, a Uyghur Muslim woman from East Turkestan (aka, Xinjiang, China) was forced to flee her homeland for the United States. She spoke at the summit, telling through her tears the story of her imprisonment and torture in a Chinese concentration camp.
“Though it is exceedingly difficult for me to speak about my experiences,” she said, “I have come to see it as my duty to be the voice for those people who are in the camps, those who died in front of my own eyes, and those who are being unjustly held in prison.” Ziyawudun went on to detail her arrest and her time in an internment camp, where she was subject to questioning, torture, and forced labor along with thousands of her Uyghur countrymen in the name of Chinese communist-style “assimilation.”
Turkic Uyghurs are mostly Muslim. They have the distinction of being both an ethnic and religious minority in China. As such, they’re subjected to especially brutal suppression. Ziyawudun and her fellow prisoners were forced to watch propaganda films and swear loyalty oaths to the party. The screams of prisoners from across the camp kept her awake at night, but that was not the worst of it. Armed Chinese police officers removed her from her cell and raped her repeatedly.
Today, her memories of prisoners being beaten, bleeding to death, or literally going insane keep her awake at night. “My nightmares make me feel as though I’m living in that fear once again,” Ziyawudun said. “My physical body is free, and so is my voice, but I am suffering deeply. I am only beginning to overcome this suffering by telling my story.”
Sadly, oppression of the Uyghur Muslims is only one piece of the Chinese communists' real record over the last century. Through civil war, execution, or starvation, the CCP under Mao Zedong alone was responsible for the deaths of roughly 80 million Chinese people in the 20th century. The Chinese communist death toll tops the grim work of Hitler and Stalin.
Sadder still, those numbers exclude the hundreds of millions of Chinese left alive after torture, forced sterilization, or other abuse. And that goes without mentioning the 400 million infants, mostly baby girls, killed by abortion over the past 40 years under the “one-child policy.”
Some anniversary.
Former Secretary of State Mike Pompeo also spoke at the Washington summit, which was co-hosted by Sam Brownback, the former U.S. ambassador-at-large for international religious freedom, and Katrina Lantos Swett, the former chairwoman of the U.S. Commission on International Religious Freedom. All made championing the rights of religious minorities in China (Muslims, Christians, and Tibetan Buddhists, among others) a cornerstone of their tenures.
Pompeo warned against totalitarian regimes that seek to undermine all political liberties by way of restricting religious liberty: “When people lose their capacity to practice their faith, authoritarian regimes will dominate. That basic truth today is being shown in China. Our American Founders understood that, that when nations disregard religious freedom, tyranny … will soon follow.”
The Chinese Communist Party maintains the Xinjiang camps holding over a million Uyghurs are for benign “reeducation.” It denies any and all human rights abuses. But that hasn’t stopped survivors such as Ziyawudun from telling the real story of the ethnic and religious suppression taking place there. They are the voices of the Uyghurs.
Let us hope the world listens to their voices and continues to fight the religious oppression and ethnic genocide taking place in China. Let us hope the Biden administration steps up and names an ambassador for international religious freedom with the leadership stature of a Sam Brownback or Katrina Lantos Swett.