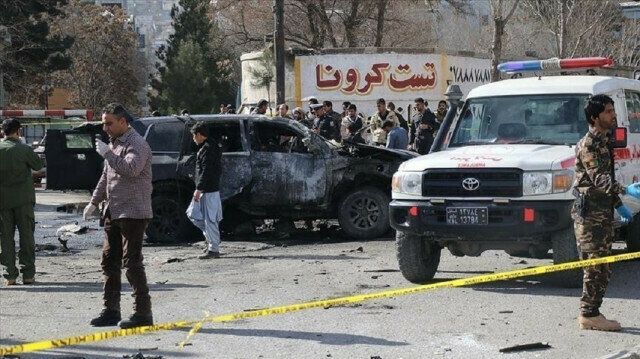 At least five civilians were killed when a mortar shell struck a taxi in Afghanistan’s southern Kandahar province on Sunday, police said.
The incident took place in the outskirts of Kandahar city around noon amid clashes between the advancing Taliban and security forces.
Police spokesman Jamal Naser blamed the Taliban for the attack.
The war between the Taliban and Afghan forces has intensified as foreign troops withdraw from the war-torn country.
The Taliban are now trying to seize provincial capitals, after taking smaller administrative districts in the past weeks.
Earlier in the day, flights were suspended at Afghanistan's second biggest Kandahar international airport after rockets hit its runway. The Taliban claimed responsibility for the attack.
The group also claimed overrunning multiple security check posts in Lashkargah, capital of restive southern Helmand province.
Numerous enemy posts have been evacuated and the Taliban are advancing, spokesman Zabihullah Mujahid said on Twitter, adding that weapons, vehicles and ammunition were also seized.
- UN calls for investigation
Separately, the UN mission in Afghanistan called upon the Taliban to undertake a full investigation and provide answers concerning Friday's attack on the UN’s main compound in Herat.
"Perpetrators for the attack that killed an Afghan guard need to be held accountable," the United Nations Assistance Mission in Afghanistan said in a statement.
"The UN as a civilian entity in #Afghanistan --focused on supporting peace efforts, promoting the rights of all Afghans and providing critical humanitarian assistance to millions of Afghans-- needs to be able to carry out its work without threats or violence," the statement read.
"The UN has communicated its grave and mounting concerns given the further violent occurrences at the #Herat base on Saturday, as well as other recent incidents involving UN personnel and assets elsewhere in #Afghanistan."
Suhail Shaheen, a Taliban spokesman, said on Twitter that the group is committed to protection of UN and all humanitarian organizations and public institutions in areas under its control.