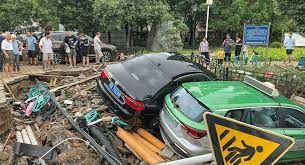 The floods caused by torrential rainfalls in central China’s Henan province have killed 302 people with 50 others still missing, the provincial government said on Monday.
"As of 12:00 [4:00 a.m. GMT] on August 2, the floods caused by the flash storms have killed 302 people in Henan, while 50 others remain missing," Wang Kai, the Governor of Henan province, said during a press conference. The worst-hit city was the provincial capital of Zhengzhou, where 292 people died and 47 others were still missing, Wang said.
When the heavy floods caused by torrential rainfalls hit Zhengzhou in mid-July, Chinese social media was filled with pictures and videos of cars floating in the flooded streets and the city’s subway system submerged underwater. Trapped passengers in flooded subway carriages sent out pleas for help through the videos. 14 passengers were killed, local authorities said.
A number of neighbouring cities around Zhengzhou also experienced similar flash storms after the provincial capital was devastated by the floods.