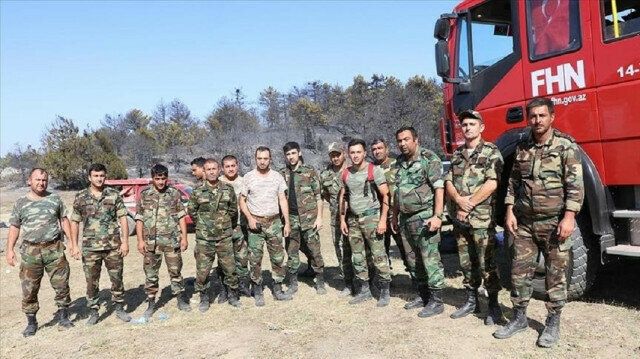 A second firefighting team from Azerbaijan arrived Wednesday in Turkey to help with massive forest fires in southern provinces that have led to deaths and injuries.
The team of 150 people working under the Ministry of Emergency Situations of Azerbaijan was divided into two groups under the coordination of the Mugla Regional Directorate of Forestry to be dispatched to fire zones in the Kavaklidere and Mentese districts in southwestern Mugla province.
Another Azeri team of 110 people arrived in Mugla last week and continues to assist efforts to extinguish the fires, Turkey's Youth and Sports Provincial Director Omer Ilman told reporters.
Teams have been responding to fires at six points with six firefighting aircraft, 16 helicopters, water sprinklers, construction vehicles, water tankers and water cannon vehicles.
Turkey has successfully contained 167 wildfires that emerged last week, according to its agriculture and forestry minister.
Wildfires erupted in 33 of Turkey’s 81 provinces, Bekir Pakdemirli said on Twitter, adding that efforts continue to put out the remaining 16 blazes in seven provinces around southern and southwestern Turkey, including in Adana, Antalya, Aydin, Denizli, Hatay, Isparta and Mugla.