Syria opposition wants Turkey as guarantor in Daraa amid attacks 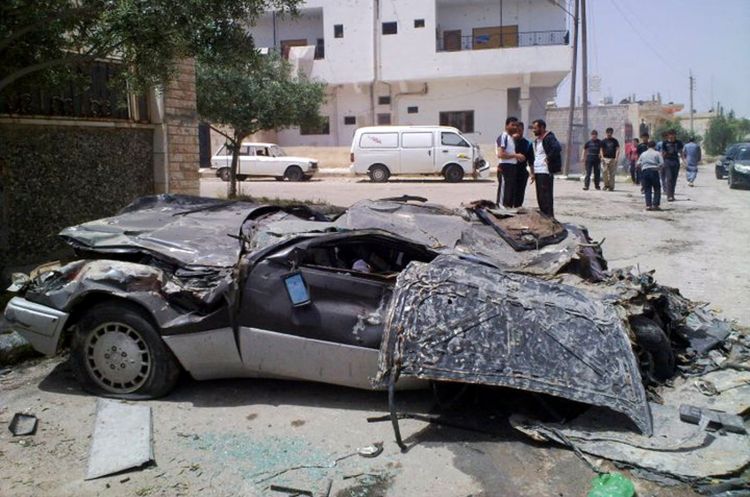 Turkey should act as a guarantor in Syria’s Daraa, where the Bashar Assad regime has been carrying out attacks targeting civilians, the spokesperson for the Syria opposition forces in the area said.
Muneef al-Zaim, the spokesperson for the opposition forces in Daraa, stated that Turkey should take over as guarantor in the area as Iran and Russia have been failing to fulfill their duties by protecting the Assad regime, the Türkiye daily reported on Thursday.
“Similar to Idlib, Afrin and Operation Euphrates Shield and Peace Spring areas, we want Turkish soldiers to come here and act as guarantors,” al-Zaim said.
Assad regime forces started attacking opposition forces in the region after a three-year lull when Russia intervened to act as a guarantor.
Al-Zaim claimed that the regime had blockaded the area three months ago with the goal to ultimately take over.
“In al-Balad and Salamain, we told the Assad regime forces that we cannot hand them over a list with 300 people, and they started bombing the area, which has over 350 residential units, like they have been doing in the past 10 years,” the spokesperson said. He highlighted that the people mobilized upon Assad’s assault and launched the second uprising equipped with light weapons.
Noting that the main goal of the assault is to depopulate the area and change its demography, al-Zaim said Russia wants to secure its strategic ports and bases in the area, while the PKK terrorists and Iran have other plans in the region. He argued that Iran’s ultimate goal is to divide Syria and establish a de facto administration like it has done in Iraq, while the PKK terrorist’s Syrian offshoot, the YPG, want to establish their own state.
Al-Balad, the area currently besieged by the regime, is considered to be the birthplace of the Syrian uprising.
Back in 2011, when the Arab Spring spread to Syria, a group of students in Daraa began the Syrian opposition movement by writing “Ejak el door ya doctor,” meaning “Your turn, doctor,” on a school wall. After this initial move, Daraa fell under the control of opposition forces.
The opposition activist noted that one of the reasons why the area is targeted is because some 1,000 Iranian, Russian and Assad regime forces were killed in the area when the agreement was made.
“Their insistence on al-Balad is because they want to make us feel like everything is over and to get revenge for their losses,” he said.
Meanwhile, the official also rejected claims that 60,000 people would cross into Idlib from Daraa, as he said nobody would leave their homes even if it means death.
Al-Zaim noted that his wife and daughter have been held in regime dungeons for the past eight years, while one of his sons fights in Daraa and the other in Idlib.
“We will not give up no matter what price we pay for it,” he said.
Russian President Vladimir Putin recently sent his special representative Alexander Zorin to the area, who met with the opposition leader Ahmed Awda who signed the 2018 deal.
Turkey launched four cross-border counterterrorism operations – Euphrates Shield in 2017, Olive Branch in 2018, Peace Spring in 2019 and Spring Shield in 2020 – across its border in northern Syria to prevent the formation of a terrorism corridor and enable peaceful settlement by locals. Operation Olive Branch cleared the northwestern Afrin district of YPG/PKK members while Operation Peace Spring liberated the northern towns of Ras al-Ain and Tal Abyad from the terrorist group and captured areas along the strategic M4 highway. Operation Peace Spring targeted the Assad regime and its allied militia over their advance in Idlib in violation of a truce agreed upon between Ankara and Moscow.
Al-Balad was blockaded by regime forces on June 25 after residents, including former members of the Syrian opposition, resisted an order to surrender their light weapons and allow regime forces to search houses in the area.
According to the Daraa-based Reconciliation Center and local figures, the order was opposed because it violated the terms of a 2018 deal, under which the area residents and former opposition members had to surrender all heavy weapons.
The deal allowed thousands of rebels and civilians safe passage to other opposition-held regions, while Russia-backed regime forces launched an attack to reclaim Daraa.
The regime began its military action despite agreeing earlier last week to lift the blockade.
The Russian-backed Syrian army and allied forces recaptured Daraa from the opposition in 2018, a symbolic blow to the anti-regime uprising born in 2011.
State institutions have returned, but the army still has not been deployed across the whole province, and tit-for-tat bombings and assassinations between former opposition figures and regime forces have since become routine.
Tensions flared last week, leading to what the Syrian Observatory for Human Rights (SOHR) called the "most violent and broadest clashes in Daraa since it came under regime control."
Most recently, the Syrian opposition stated late Monday that stopping the regime’s attacks on Syria's southern province of Daraa is a humanitarian and legal duty after the regime's deadliest flareup in three years killed 28 people including 11 civilians.
Similarly, the White Helmets Syrian civil defense group called on the United Nations Security Council (UNSC) and the international community “to take urgent action to stop the Assad regime, Russia, and their militias from carrying out further attacks.”