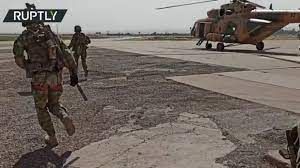 Russian troops and hardware, deployed this week close to the Afghan border, took part in Uzbek-Russian military drills and trilateral exercises in neighboring Tajikistan, as the Taliban continued its offensive in Afghanistan.

The Russian-Uzbek drills took place at the Termez field training camp, located in the southernmost mountainous region of the country. Some 1,500 Russian and Uzbek servicemen honed their tactical skills in the five-day exercise, which began on Monday.

The drills were focused on strengthening the cooperation between the Russian and Uzbek military, which were tasked with fending off mock terrorist groups. Footage from the scene shows commando units disembarking from Mi-171 and H-215 helicopters onto rough terrain, then searching for and destroying the enemy before heading on foot to their extraction point.

The multinational ground troops were using hardware supplied by the Uzbek side, but received heavy air support from Russia. Four Tu-22M3 strategic bombers were filmed taking part in the drills, with the aircraft taking off an airfield in Russia’s southern region of Saratov and flying some 2,000km (1,240 miles) to the Termez testing grounds.

The drills are taking place amid growing instability in the Central Asian region, and have received top-level attention. Russia’s Chief of Staff, General Valery Gerasimov, came to Uzbekistan on a two-day visit to meet senior officials and reiterate Moscow’s support for its Commonwealth of Independent States allies.

During a meeting with his Uzbek counterpart, Shuhrat Khalmukhammedov, Gerasimov said the drills were a response to “the deteriorating situation in the region,” and the troops needed “practice in repelling terrorist threats … both on the territory of Uzbekistan and on the territory of Tajikistan.” Russia has already increased its supply of weaponry and military hardware to the region under the existing cooperation framework, he added.

Just as the Termez exercise was about to conclude, another set of joint drills, involving the Russian, Uzbek and Tajik military, was launched in neighboring Tajikistan. The exercise, involving some 2,500 servicemen and around 500 pieces of hardware, is taking place at the Harb-Maydon training ground, close to Afghanistan’s border. Russian troops are mainly represented at the event by the personnel of the 201st military base, located in Tajikistan.

The series of Central Asian drills is set against the backdrop of the deteriorating situation in Afghanistan, where the country’s government is struggling to stem the ongoing Taliban offensive. In the past 24 hours, government troops lost two provincial capitals to the militants: the city of Zaranj in the southwest and Sheberghan in the north.