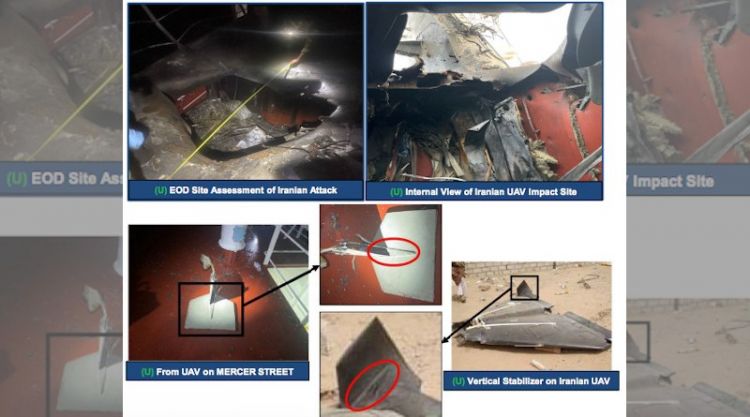 Drone fragments recovered from the attack on an Israeli-linked oil tanker off the coast of Oman show Iran was behind the incident, The Wall Street Journal reported on Friday citing a US military report.
Photographs of drone parts and analysis of the proximity of the strikes to Iran, and the sophistication of the attack point to Iran’s involvement, a report by the US Central Command (CENTCOM), which oversees military operations in the Middle East and Afghanistan, said.
The debris, found on and close to the damaged tanker, “were identical to (components in) previously identified Iranian unmanned one-way attack systems,” the report said.
“The use of Iranian designed and produced one way attack ‘kamikaze’ UAVs is a growing trend in the region…They are actively used by Iran and their proxies against coalition forces in the region, to include targets in Saudi Arabia and Iraq,” the report added.
The detailed accusations, based on findings by investigators from from the US aircraft carrier USS Ronald Reagan following a visit to the MV Mercer Street,  also mentioned the proximity of the strikes to Iran.
“The distance from the Iranian coast to the locations of the attacks was within the range of documented Iranian one-way attack UAVs (unmanned aerial vehicles),” the Central Command report said.
US investigators further said it appeared the tanker had been hit by a total of three drones on July 29-30, killing the ship’s master and a security officer.
British and Israeli explosives experts, who were given access to evidence, concurred with the US findings, according to CENTCOM.
Meanwhile Foreign ministers from the Group of Seven economies said Iran was threatening international peace and security due to findings following the attack.
During a meeting in Tokyo, they condemned the “unlawful attack committed by Iran,” which killed a British and a Romanian national. They also confirmed their unified position in their commitment to maritime security and the protection of commercial shipping.
“This was a deliberate and targeted attack and a clear violation of international law. All available evidence clearly points to Iran. There is no justification for this attack,” the foreign ministers of Canada, France, Germany, Italy, Japan, UK and the US and the High Representative of the European Union said in a statement on Friday evening.