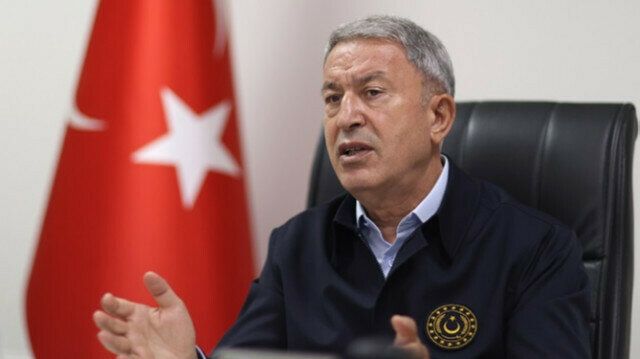 Turkey’s Defense Minister Hulusi Akar called on Pakistan’s Prime Minister Imran Khan in the capital Islamabad on Wednesday to discuss a range of issues, including Ankara’s ongoing efforts for a political solution in Afghanistan.
Stressing the need for a negotiated political settlement, Khan expressed hope that Afghan leaders would recognize “the importance of international convergence on the way forward and achieve an inclusive, broad-based and comprehensive political settlement,” according to a statement from the Pakistani premier’s office.
Islamabad, he said, will continue to make “every effort to help advance the Afghan peace process and to realize a political solution.”
Khan highlighted that the historic fraternal ties between Pakistan and Turkey are “marked by unique mutual trust and mutual support.”
He conveyed his greetings for Turkey’s President Recep Tayyip Erdogan and the brotherly Turkish people.
Expressing “deep” concern over the forest fires in Turkey, he reaffirmed Pakistan’s solidarity and readiness to extend all possible assistance, the statement said.
Khan expressed satisfaction at the existing level of bilateral defense cooperation, thanking Ankara for its “strong and consistent support to Pakistan on all issues, particularly the Jammu and Kashmir dispute.”
Akar, for his part, conveyed warm greetings from President Erdogan and reiterated Turkey’s support to Pakistan “on all issues, including Jammu and Kashmir.”
He concurred with Khan on enhancing cooperation in all areas, including in the defense field, the statement added.
Akar is visiting Islamabad as part of frequent high-level exchanges between Pakistan and Turkey for consultations on important bilateral and regional issues.
He also met army chief Gen. Qamar Javed Bajwa, Defense Minister Pervez Khattak, and other senior government officials on Tuesday.