One Dead, 2 Missing in Landslide After Heavy Rains in Japan, Reports Say - ednews.net

One Dead, 2 Missing in Landslide After Heavy Rains in Japan, Reports Say 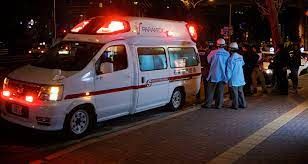 One person has died and two more remain unaccounted for after a landslide hit the city of Unzen in Japan's Nagasaki prefecture, the NHK broadcaster reported on Friday.
In the morning, the fire service received a call about a hotel damaged by a landslide. The rescuers who came to the scene said two private houses were severely hit. An unconscious woman was uncovered, but she later died in hospital. One rescued man got serious injuries and was admitted to a hospital. Two other people are unaccounted for.
Unzen was swept by downpours, with record 700 mm of rainfall registered over the past two days. In the next 24 hours 300 mm more of rainfall are expected.
The southwestern prefectures of Hiroshima, Fukuoka, Saga, Nagasaki, Kumamoto, Oita and Kagoshima have issued evacuation warnings for some 3 million people.