Rescue efforts continue to save tortoises in French wildfire - ednews.net

Rescue efforts continue to save tortoises in French wildfire 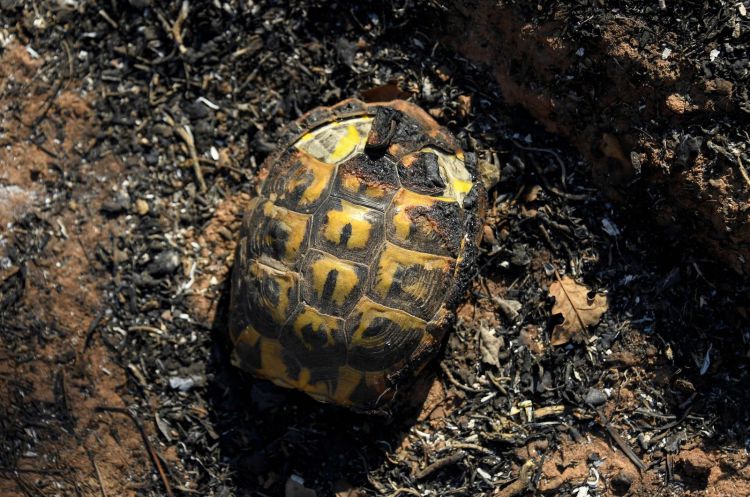 The French Riviera has been ablaze with wildfires, the country's worst in living memory, that have affected vital ecosystems and endangered local wildlife.
In a deadly silent and scorched landscape, French scientist Dominique Guicheteau lies on his front, plunges his hand under a rock and brings out a Hermann's tortoise.
This one, at least, appears to have survived the raging wildfire's merciless passage through a biodiversity hotspot in southern France, near the glitzy resort of Saint Tropez.
For four days firefighters have battled the blaze that killed two and forced thousands to flee. A few kilometers (miles) away, the struggle continues.
Equipped with antennas, around 20 specialist volunteers are Thursday on the lookout for the creatures with black and yellow-patterned carapaces still in the area, home to 241 protected species.
So far, the group has found 31 alive, and one dead. But the happy average is far from a coincidence.
"We headed to the areas where we knew the tortoises might survive, thanks to the rocks" that protect from the flames, says Guicheteau, the scientific director of Plaine des Maures natural reserve.
The tortoises are plunged into a bowl of water, weighed and measured. The volunteers then carefully put them back in their now-burnt natural habitat where they will have to wait for autumn and rain to feed on grass, before hibernating.
As wildfires supercharged by climate change-induced drought and heat waves ravage parts of Europe, conservationists are increasingly concerned for the fate of wild species.