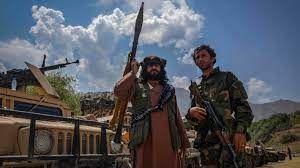 The Taliban radical movement (outlawed in Russia) and the Northern Alliance (the United Front for the Salvation of Afghanistan) have agreed to refrain from military action and attacking each other, the English desk of the Geo TV channel reported on Thursday citing sources.
It is noted that the sides will make an announcement about the agreement at a press conference during the day.
According to the sources, the meetings between the delegations of the Taliban and the Northern Alliance took place over the past two days in Charikar in Afghanistan’s Parwan Province. It is expected that the deal will prevent potential clashes between the supporters of the two organizations in the Panjshir Province which remains the only Afghan region not controlled by the Taliban.
After the Biden administration had announced the end of Washington’s 20-year-long military operation in Afghanistan and the launch of its troop pullout, the Taliban embarked on an offensive against Afghan government forces. On August 15, Taliban fighters swept into Kabul without encountering any resistance, and gained full control over the Afghan capital within a few hours. Afghanistan’s President Ashraf Ghani said he had stepped down to prevent any bloodshed and subsequently fled the country. Vice President Amrullah Saleh announced that, in the absence of the head of state, the constitution empowered him to become the caretaker president and urged the Afghan people to join the resistance against the Taliban. The armed resistance in the country’s Panjshir Province is led by Ahmad Massoud, the son of renowned guerilla commander Ahmad Shah Massoud (1953-2001).
According to available data, the Alliance numbers up to 10,000 combatants including servicemen from the government’s active armed forces and has heavy armaments at its disposal. On August 22, the Taliban announced that they were dispatching their formations to capture Panjshir. According to media outlets, following this announcement, Ahmad Massoud began negotiations with Taliban representatives in order to create an inclusive government and to overcome political differences.