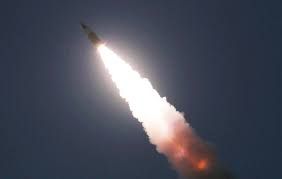 North Korean authorities earlier claimed they had successfully tested new long-range cruise missiles. The US and its allies condemned the action, Sputnik reports.
South Korea's Joint Chiefs of Staff (JCS) said in a statement on 15 September that North Korea had fired what is believed to be two ballistic missiles towards the exclusive economic zone of Japan.
South Korea's JCS noted that it is carefully analysing the information with US intelligence agencies. Seoul is also expected to convene its National Security Council over the incident.
Japan's Prime Minister Yoshihide Suga condemned North Korea's launch of ballistic missiles, dubbing the action a threat to peace and security in the region. Suga also ordered to urgently convene the country's National Security Council.
"North Korea's ballistic missile launches threaten the peace and security of our country and the region. They are in violation of the UN Security Council's decisions. We express our strong protest and strongly condemn [them]", Suga said.
Prior to the official statement by the South Korean and Japanese authorities, the nations' media reported about two unidentified projectiles launched within the space of several minutes.
The state-run Korean Central News Agency (KCNA) reported on 13 September that Pyongyang had carried out a successful test of a cruise missile. North Korean experts reportedly held thrust tests for missile engines on the ground, flight tests, control and guidance tests, and a number of others. The said missiles are reportedly capable of hitting targets at a distance of 1,500 kilometres.
Following the reported launch, Japan's Defence Minister Nobuo Kishi noted that if the information on the success of North Korea's cruise missile tests is confirmed, it could become a potential threat to the peace and security of the region.
On 14 September, diplomats from Japan, South Korea, and the United States held a trilateral meeting on North Korea in Tokyo. The meeting was attended by US special envoy for North Korea Sung Kim, head of the Japanese Foreign Ministry's Asian and Oceanian Affairs Bureau Takehiro Funakoshi, and the South Korean Foreign Ministry's special envoy for peace and security on the Korean Peninsula Noh Kyu-duk.
One of the key topics of discussion was a possible response to the statement by Pyongyang about successful missile tests. The parties agreed to continue cooperation on the denuclearisation of North Korea by combining dialogue with North Korean authorities and sanctions pressure.
North Korea last test-fired ballistic missiles in March. Two cruise missiles were reportedly launched towards the Yellow Sea at low altitude at a short range, and two ballistic missiles were launched toward the Sea of Japan.