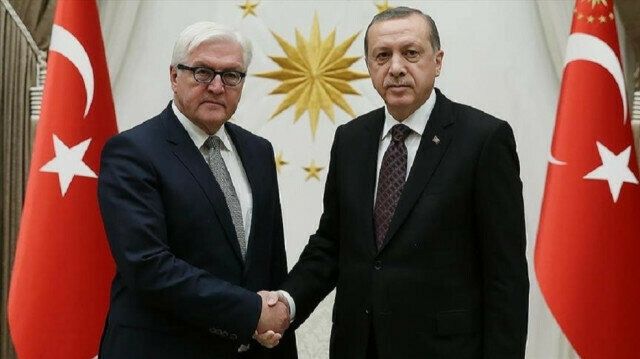 The presidents of Turkey and Germany discussed bilateral relations, Afghanistan, and migration issues on Tuesday, according to an official statement.

Citing Steinmeier's remarks at a panel last Friday, Erdogan welcomed his German counterpart’s praise for the Turkish community in Germany and Turkey.

In a speech marking the 60th anniversary of the signing of the German-Turkish labor agreement, Steinmeier thanked Turkish immigrants who arrived in Germany in the 1960s for contributing to the country’s economic growth and its transformation into a rich, culturally diverse society.

"The people who came at that time, who were called guest workers: You, your children, your grandchildren are today part of what makes Germany. A Germany without you is simply not imaginable hereafter," said Steinmeier.

Erdogan also hailed Turkey and Germany's coordination and solidarity as NATO allies during last month’s evacuations from Afghanistan, stressing the need to maintain the same approach during the "critical process" Afghanistan is now going through.

Stressing that necessary humanitarian aid must be delivered to Afghanistan by the UN and other groups, the Turkish president said no one wants to see a replay of the migrant flow from Syria in 2015.

Germany and the EU should provide support to neighboring countries that bear the burden of Afghan migration in this regard, he added.

Erdogan stated that some European countries have limited the issue to only border security, underlining that Turkey does not have the capacity to shoulder a new migration burden.

In the call, Erdogan also said his country rightfully expects implementation of 2016 Turkey-EU migration agreement in all respects, stressing that the EU must take steps on matters such as revitalizing Turkey's membership negotiations, updating the Customs Union, and visa liberalization for Turkish citizens.

The migration deal was signed on March 18, 2016, as the Syrian civil war continued to uproot millions who then began their "journey of hope" to reach the EU.

Turkey has long complained that while it upheld its end of the deal, the EU did not keep its pledges, including on visa liberalization.