Houthi execution of nine civilians, including minor, a terrorist crime 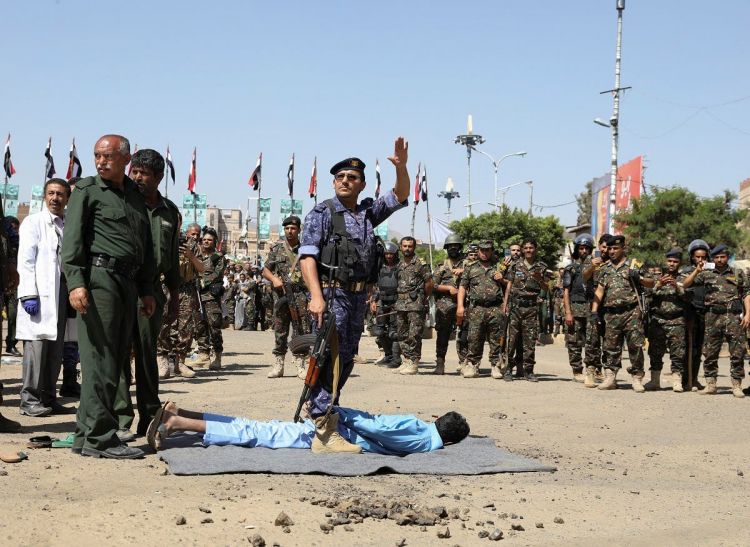 The execution of nine civilians in Yemen, including a 17-year-old minor, at the hands of the Iran-backed Houthis should be considered a terrorist crime, according to Yemen’s Minister of Information.
“Iranian-backed Houthi militia executed 9 civilians [from] Hodeidah, [including] minor, after years of enforced disappearance & torture, led to death of 1, & subjected them to mock trial, deprived of basic rights, a terrorist crime that revealsIts, criminality, & disregard for lives of Yemenis,” Yemeni Minister of Information Moammar al-Eryani tweeted on Saturday.
“The massacre is an escalation that recalls Iranian mullahs’ execution of its opponents, &launch of mass killings of opponents of its coup, &use of the judiciary under its control as a tool to settle its political scores terrorize its opponents politicians, media & journalists,” he added.
Yemen's Iran-backed Houthi militia said on Saturday that authorities had executed nine men who were convicted of involvement in the 2018 killing of Saleh al-Samad, then the armed group's top civilian leader.
Samad, who held the post of president in the Houthi-controlled administration which runs most of northern Yemen, was killed in April 2018 by a Saudi-led coalition air strike in the port city of Hodeidah on Yemen's west coast.
“We affirm that the horrific crimes committed by terrorist Houthi militia against civilians in, &cold-blooded murder of 9 civilians, won’t be subject to statute of limitations &go unpunished, and that all militia leaders & elements involved in it will be brought to justice soon,” al-Eryani said.
Al-Eryani said the internationally-recognized government of Yemen had regrets over the “international community, United Nations, UN & US envoys silence and inaction regarding Houthis militia’s continuing crimes and violations against civilians,” adding that the crimes of the Houthis were no “no less bloody and heinous than that of al-Qaeda and ISIS.”