‘Qadi’ has been arrested, what about other ISIS members in Turkey? | Eurasia Diary - ednews.net

‘Qadi’ has been arrested, what about other ISIS members in Turkey? 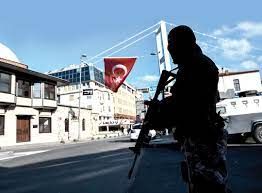 The Lawyers' Commission of the October 10 Ankara Massacre Case has released a written statement about the legal proceedings against the ISIS members in Turkey in the wake of the arrest of Abu Abdullah Al-Shami code named Jamal Abdulrahman Alwi, the "ISIS qadi" (a magistrate or judge of a Sharia court) who gave the order of executing Turkey's soldiers Sefter Taş and Fethi Şahin by burning them on December 22, 2016.
The Commission of Lawyers has stated that the so-called ISIS "qadi" was arrested as a result of the public reactions sparked by the news that he had been released pending trial. The lawyers have said:
"When the news reported in the press is considered, it is seen that there are several statements and news indicating that the senior executives of ISIS were caught; these statements and news have one thing in common: Following the news on getting caught, there is not a single statement made by the officials regarding the fate and whereabouts of these people."
Arguing that the law enforcement is "treating ISIS members with tolerance," the lawyers have cited the October 10 Massacre as an example:
"In the trial over the October 10 Ankara Massacre, we detected at the very beginning of the trial that the ISIS members had been strictly followed by the police, but nothing had been done about them and we endorsed this finding with every new document submitted.
"It was to such a degree that Ahmet Güneş, one of the perpetrators of the Ankara massacre, had video footage showing him while executing a captive in Syria; however, he was still released in the trial in Gaziantep, fled to Syria and joined the organization of the massacre.
We have shared with the public with its documents over the course of the trial for five years that both courts and law enforcement treat ISIS members with an extreme tolerance.
'Disclose their fate and whereabouts'
Addressing the Ministry of Interior, Ministry of Justice and relevant institutions, the lawyers have called on them to disclose the fate and whereabouts of the ISIS members and the fugitive defendants of the massacre. The lawyers have asked the following questions:
"The fate and whereabouts of how many caught ISIS members have been unknown since 2015? Where are they and what are they doing?
"What legal action has been taken against the identified high ranking ISIS militants? Which of them have been on trial? Which of them have been released or deported? Has any of them given information about the organizations and actions of ISIS in Turkey and massacres?
"Are there any other high ranking ISIS militants who have been caught, but not reported in news? What legal action has been taken against them?
"Considering that it is sometimes announced that some ISIS members are caught in Syria and brought to Turkey, are there any efforts to catch the fugitive suspects who are wanted as the perpetrators of the massacres in 2015-2016 and detected to be in camps in Syria?
"Who decides which ISIS members are to be caught and based on what?
"Why have the security forces who have been boasting that they caught the wife of Baghdadi, the highest ranking ISIS member, been unable to catch even a single one of the fugitive defendants who have been walking around freely for 6 years as the perpetrators of massacres?"