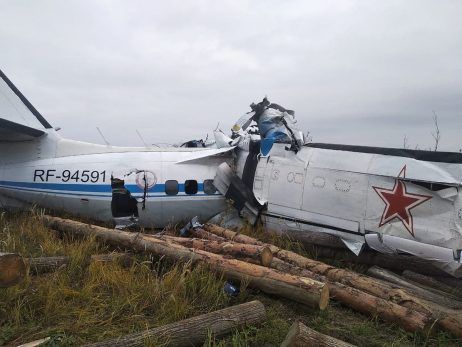 The pilot, co-pilot and 14 passengers died in the crash.

The plane was built in 1987 and belonged to the Menzelinsk branch of the government-linked Volunteer Society for Cooperation with the Army, Aviation and Navy.
Rustam Minnikhanov, president of the Tatarstan region, said the left engine of the plane failed.
He added that pilots reported the problem at an altitude of 230 feet and steered the plane left to avoid a settlement before crashing.
The plane broke in two and overturned with the front half sustaining severe damage, Minnikhanov said.
The incident was the third deadly crash involving an L-410 in Russia this year.
Russia has also recorded a total of 10 fatal crashes of small passenger planes and helicopters in 2021.