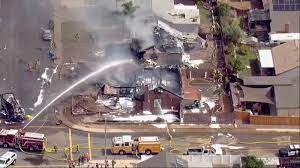 At least two people were killed and two others were injured Monday when a small plane crashed into a suburban Southern California neighborhood, setting two homes ablaze, authorities said.
It wasn’t immediately known whether the victims were on the ground or on board the twin-engine Cessna that went down around midday in Santee, about 20 miles (30 kilometers) northeast of downtown San Diego,
Deputy Fire Chief Justin Matsushita says two people died at the scene and two are hospitalized in unknown condition.
Two homes and multiple vehicles were destroyed by fire, officials said.