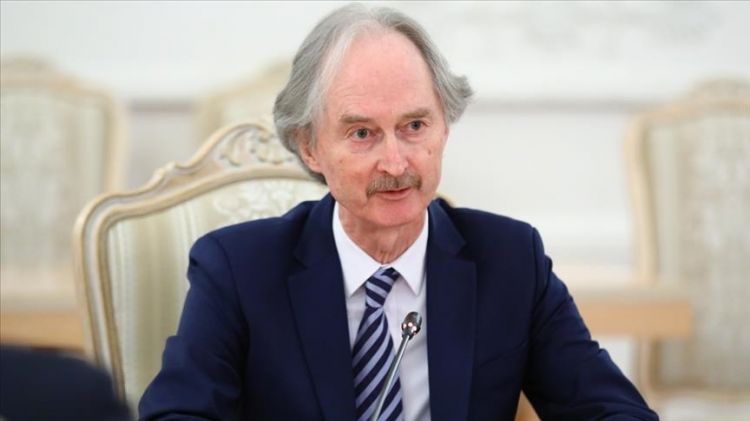 “So, the new thing this week is that we will actually be starting a drafting process for constitutional reform in Syria,” he added.

The members of the “Middle Third” of the constitution committee, consisting of 15 members apiece from the Bashar al-Assad regime, NGOs, and the Syrian opposition, are meeting again in Geneva after a nearly nine-month hiatus.

Pedersen also said that he met the representatives of the Assad regime, NGOs, and the Syrian opposition separately on Sunday morning.

“But then also another very important meeting took place, and that was for the first time, the two co-chairs, the one nominated by the government and the other nominated by the opposition, were sitting down together with me for a substantial and frank discussion on how we are to proceed with the constitutional reform and indeed in detail how we are planning for the week ahead of us,” he added.

He said that the drafting committee has met five times, but after the fifth meeting this January, it concluded that they were “not making sufficient progress.”

Asked by Anadolu Agency how many more rounds of meetings are expected before a constitution is ready, he said: “Very short answer to that, I don’t know. We will see how the meeting proceeds this week and then you (will) know.”

The committee meetings, which started in October 2019 with 150 members, are the first concrete step to draft a new constitution to determine Syria’s future.

Syria has been embroiled in a vicious civil war since early 2011 when the Assad regime cracked down on pro-democracy protests with unexpected ferocity.

More than 5 million civilians have since been displaced.

A round of Syrian peace talks in Geneva in January failed as the sides could not agree on how to engage.