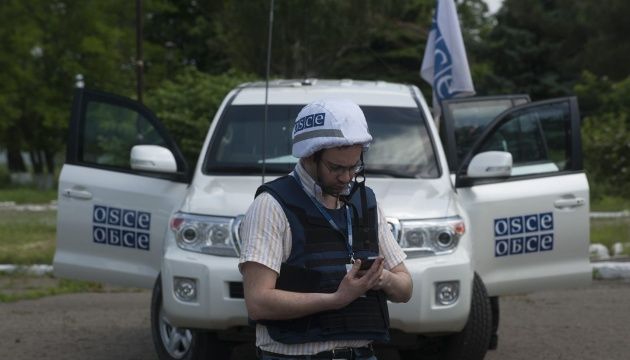 Russia may resort to new provocations against representatives of the OSCE Special Monitoring Mission in the temporarily occupied territories of Ukraine, the Main Intelligence Directorate of the Ukrainian Defense Ministry has reported on Facebook.
According to Ukraine's military intelligence, the Russian leadership may continue the operation to discredit the Mission.
"The incident related to blocking the work of the OSCE Mission and taking international observers hostage has once again demonstrated the Russian authorities' disregard for all norms of international law and their inability to comply with their commitments," the report said.
The Main Intelligence Directorate has repeatedly recorded provocations and information and psychological operations being carried out by Russia ahead of high-level international meetings.
According to the report, the objective of the Russian occupation administrations is to create artificial problems for the work of the Mission's observers on the eve of talks between the foreign ministers of the Normandy Four countries, which are to be held in the near future.
"Ukraine will use all diplomatic opportunities to resume the work of observers in the temporarily occupied territories," the statement said.
On October 17, Russian-backed forces blocked the exit from the OSCE SMM's forward patrol base in the temporarily occupied city of Horlivka. Observers were also not allowed to leave the hotel.