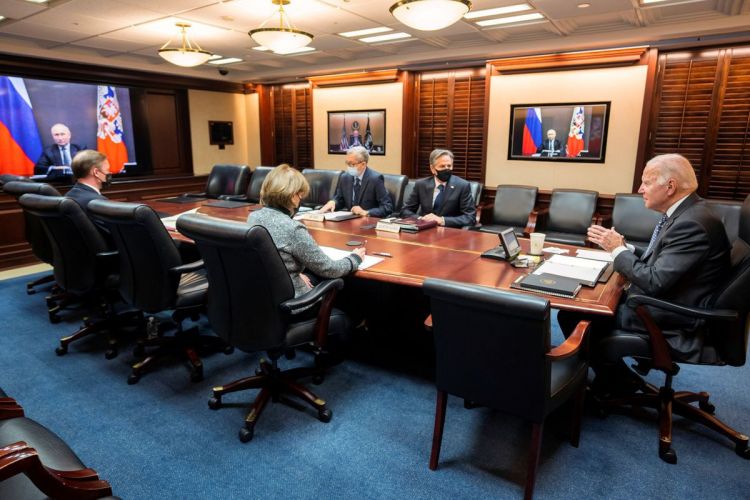 Presidents Vladimir Putin and Joe Biden set out their opposing positions on Ukraine in a video call on Tuesday and agreed that Russia and the United States should keep talking, the Kremlin said, Reuters reports.

"It's hard to expect any sudden breakthroughs, but the presidents demonstrated their willingness to continue practical work and begin discussing sensitive issues that seriously concern Moscow," Kremlin aide Yuri Ushakov said after the two-hour talks.

Beyond the agreement to hold further discussions, there was no sign of any narrowing of positions in Moscow's readout of the conversation, which followed weeks of tension over the massing of Russian troops on the border with Ukraine.

A Kremlin statement said Putin repeated Moscow's accusation that Ukraine was behaving provocatively and taking a "destructive line" aimed at dismantling agreements from 2014 and 2015 designed to end a war with Russian-backed separatists.

It said Biden spelt out the possibility of Western sanctions against Russia if the situation escalated and accused Moscow of threatening behaviour. Putin responded that "it is actually NATO that is making dangerous attempts to conquer Ukrainian territory and is building up its military potential at our borders."

"Therefore, Russia is seriously interested in obtaining reliable, legally fixed guarantees that rule out NATO expansion eastward and the deployment of offensive strike weapons systems in states adjacent to Russia," the Kremlin said.

It said the two leaders agreed to instruct their representatives to engage in "substantive consultations on these sensitive issues".

Russian authorities have said that NATO's growing ties with Ukraine and the possibility of the alliance deploying missiles targeted against Russia there represent a "red line" it will not allow to be crossed.

Putin also told his U.S. counterpart he wanted guarantees that offensive strike systems would not be deployed in countries close to Russia, the Kremlin said.

The talks were held as the West voiced concerns that Russia will invade Ukraine and warned of "strong economic and other measures" as punishment should Moscow start a military conflict.