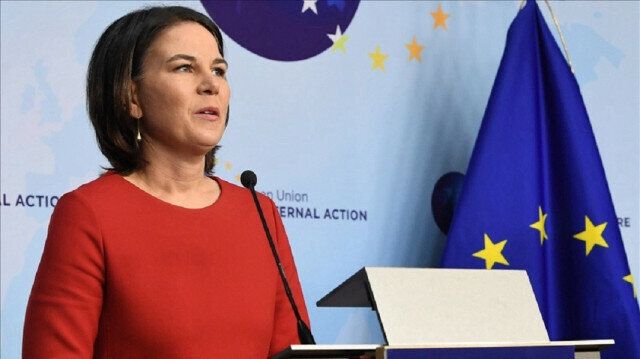 Germany urged Russia on Monday to back off from its military threats and pursue a diplomatic solution to the Ukraine crisis, Yeni Safak reports.

Foreign Minister Annalena Baerbock said her meetings in Kyiv on Monday and Moscow on Tuesday will focus on de-escalating tensions and revive the Normandy format talks.

“I want to find out whether there is a willingness to seek solutions through diplomatic means – especially to revitalize the Normandy process and finally make progress in the implementation of the Minsk agreements,” she said.

Her remarks came amid growing concerns over the recent Russian troop buildup on the Ukrainian border and fears of a new military assault on the country.

Germany and France brokered a cease-fire deal in 2015 on the Ukrainian conflict, but Normandy format talks between the conflict parties have been stalled, with both sides blaming each other for not implementing the Minsk cease-fire agreement.

Baerbock said Germany and its Western allies are ready for a “serious dialogue” with Russia on European security issues, but they will not bow to Moscow’s demands over Ukraine.

“We cannot and will not compromise on the fundamental principles of the Helsinki Final Act, which have saved Europe from the nightmare of a major war for the last 50 years,” she said.

“These include inviolability of borders, right of every state to choose its alliances freely, and refraining from the threat of use of force as a political tool. We are determined to respond if Russia chooses to escalate,” she added.

The US administration has warned its European allies recently over Russia’s possible military attack, claiming that Moscow is planning to carry out a false-flag operation to justify invasion of Ukraine.

Kremlin spokesman Dmitry Peskov told CNN on Sunday that Russia is not threatening anyone with military actions, but “will be ready to take counteractions”.

Peskov accused NATO of recent tensions, and said Russia “will have to do something” if the military alliance ignores Moscow’s security concerns.