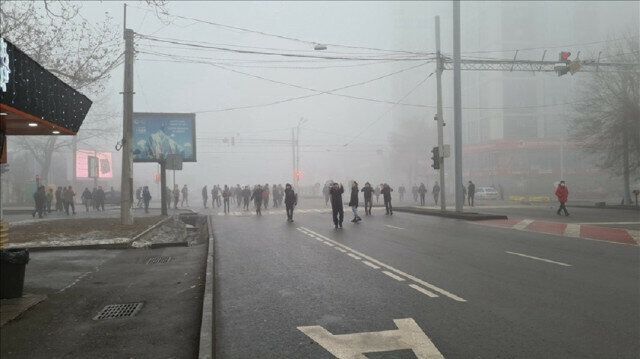 Speaking at a news conference on an investigation into the events that took place in the country at the beginning of January, Rizabek Ojarov, head of the Kazakhstan Chief Prosecutor's Office Special Prosecutors Department, pointed out that the nationwide protests were used by "several extremist groups" for their own benefit.

"Now we know for sure that the peaceful protests were used by different forces," he said.

Noting that his country was exposed to a coordinated hybrid attack, Ojarov said the actions of these forces were clear signs of political extremism.

He emphasized that the Chief Prosecutor's Office is currently carrying out extensive investigative activities on this case.

"Currently, 18 members of organized crime and 35 members of banned extremist movements are in custody. Among them is a member of a criminal-oriented group of a subversive religious movement," he added.

He went on to say that the ultimate goal of the provocateurs was to seize power by force and weapons.

"The investigation continues against the former head of the National Security Committee and two of his deputies on suspicion of committing treason and the seizure of power by force. We are examining a version that some security force administrators deliberately hindered the movements of special forces responsible for maintaining social order," Ojarov said.

He underlined that the detention periods of 467 people continue on grounds such as rioting and organizing and participating in terrorist attacks.

"We responsibly declare that there are no random persons in pre-trial detention centers," he said.

Ojarov also stressed that during the January protests, over 3,000 guns were stolen, 1,545 of which were military weapons and more than 1,600 store weapons.

"Only half of these weapons were seized by the security forces. The rest are still in the hands of unknown persons," he said.

On Jan. 2, massive protests broke out in Kazakhstan over an increase in fuel prices in the city of Zhanaozen in the Mangystau region which later turned into clashes with police, with the most violent incidents taking place in Kazakhstan’s former capital and largest city Almaty.