Roots of Peace and the International Eurasia Press Fund have addressed an appeal to the UN Secretary-General
Read: 358

We are now stationed all along the border, military units have been established on all our borders - Azerbaijani President
Read: 239 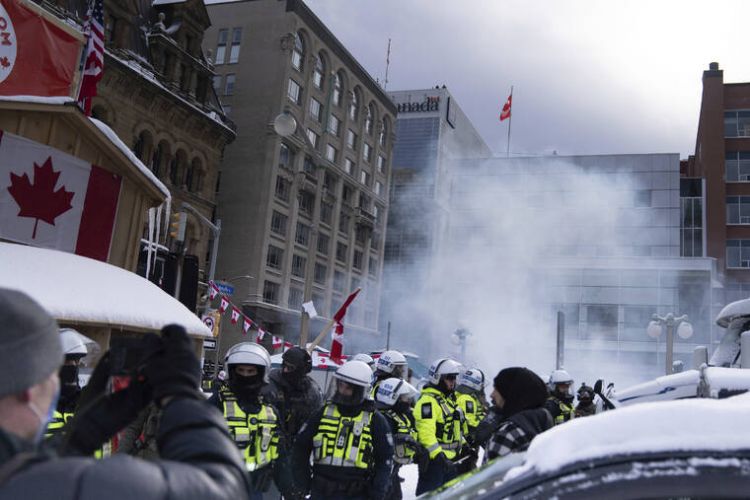 Hundreds of police in riot gear swept through the streets of Canada's besieged capital Saturday, arresting or driving out protesters, towing away their trucks and finally retaking control of the streets in front of the country's Parliament buildings.

With protesters in clear retreat under the increasing pressure of one of the largest police operations in Canada's history, authorities' hopes were rising for an end to the three-week protest against the country's COVID-19 restrictions and the government of Prime Minister Justin Trudeau.

By early Saturday afternoon, protesters were gone from the street in front of Parliament Hill, the collection of government offices that includes the Parliament buildings, which had the heart of the protests. It had been occupied by protesters and their trucks since late last month, turning into a carnival on weekends. "They are trying to push us all away," said one protester, Jeremy Glass of Shelburne, Ontario, as authorities forced the crowds to move further from the Parliament buildings. "The main camp is seized now. We're no longer in possession of it."

Protesters 'aggressive' Police said protesters remained "aggressive and assaultive" and that pepper spray had been used to protect officers. Authorities also said children had been brought right to the police lines, saying it was "putting the children at risk."

Canadian authorities also announced they had used emergency powers to seize 76 bank accounts connected to protesters, totaling roughly $2.5 million U.S. On Saturday, they also closed a bridge into the nation's capital from Quebec to prevent a renewed influx of protesters. Around midday, protest organizers said they had ordered truckers to move away from Parliament Hill, decrying the police's actions as "abuses of power."

"To move the trucks will require time," organizers said in a statement. "We hope that [police] will show judicious restraint." Earlier, Ottawa police addressed the protesters in a tweet: "We told you to leave. We gave you time to leave. We were slow and methodical, yet you were assaultive and aggressive with officers and the horses. Based on your behavior, we are responding by including helmets and batons for our safety."

Police said one protester launched a gas canister and was arrested as they advanced.