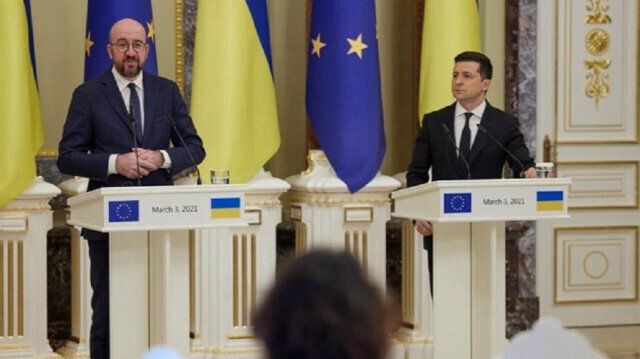 “It is a crucial moment to close the long-standing discussion once and for all and decide on Ukraine's membership in the #EU,” said Zelenskyy on Twitter.

“Discussed with @eucopresident further effective assistance and the heroic struggle of Ukrainians for their free future,” he added.

Michel, in response to Zelenskyy's tweet, said: "Ukraine and its people are family. Further concrete support is on its way."

Zelenskyy earlier spoke to his French counterpart Emmanuel Macron, saying: “Weapons and equipment from our partners are on the way to Ukraine. The anti-war coalition is working!”

Russia’s military intervention in Ukraine entered its third day Saturday with the latest reports indicating that Russian troops clashing with Ukrainian forces in the capital Kyiv.

He claimed that Moscow had no plan to occupy the neighboring country but wanted to “demilitarize” and “denazify” Ukraine.

Zelenskyy accused Russia of trying to install a puppet government and said Ukrainians will defend their country against Russian aggression.