Around 1.8 million people have been affected in the largely rural, mountainous Hunan province — 286,000 of whom have been evacuated to safety. 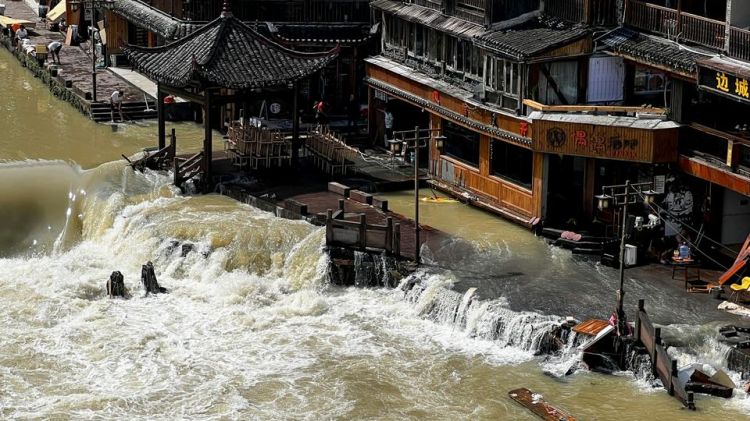 At least 10 people have been killed and three are missing in flooding in the central Chinese province of Hunan, while a landslide buried parts of a village in the southern Guangxi region.
Storms have pummelled Hunan since the beginning of the month, with some monitoring stations reporting historic levels of rainfall, the Xinhua News Agency said late on Wednesday.
Around 1.8 million people have been affected in the largely rural, mountainous province — 286,000 of whom have been evacuated to safety while more than 2,700 houses have been damaged or collapsed entirely, Xinhua said.
In Guangxi, rescue crews on Thursday were still looking for survivors in Xinfeng township, where days of rain have left hillsides waterlogged and prone to slippages, according to state broadcaster CCTV.
One woman was confirmed killed in the landslide and another was pulled out alive, CCTV said.
Authorities have issued warnings for continued heavy downpours in Guangxi and the nearby provinces of Jiangxi, Fujian, Guangdong, Hainan, Sichuan, Chongqing and Yunnan, Xinhua said.
Drivers and school administrators have been alerted to take safety precautions, Xinhua said.
Intense tropical storms
China regularly experiences flooding during the summer months, most frequently in central and southern areas that tend to receive the most rainfall.
China’s worst floods in recent years were in 1998, when more than 2,000 people died and almost three million homes were destroyed, mostly along the Yangtze, China’s mightiest river.
The government has invested heavily in flood control and hydroelectric projects such as the gargantuan Three Gorges Dam on the Yangtze.
Globally, more intense tropical storms are on the rise as a result of climate change, leading to increased flooding that threatens human lives, crops and groundwater quality.