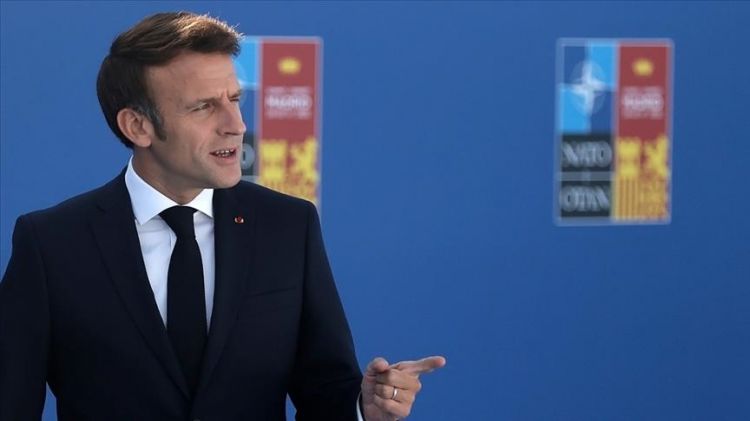 French President Emmanuel Macron said Thursday he was pleased with Türkiye's decision to support Finland and Sweden's accession to NATO.

According to Anadolu Agency, speaking at a press conference at the end of the three-day NATO summit in Madrid, Spain, Macron started by thanking his host country but quickly moved to address the growing threats and need for a strengthened unity among member states.

“We have had the opportunity this morning to discuss the threats and challenges we all face and the need to respect the security interests of each of the allies in the strategic decisions we take,” he said.

“We have sometimes had frank discussions in the past, in particular with Türkiye on these subjects. We are pursuing them because an alliance has been made for this and because I am attached to cohesion.”

Turkish President Recep Tayyip Erdogan in May had accused Finland and Sweden of sympathizing with Kurdish rebels and said he would block the two countries’ accession to NATO.

Erdogan has said that the two nations have become havens for the rebels.

“These countries have almost become guesthouses for terrorist organizations,” he was quoted by The New York Times as saying. “It is not possible for us to be in favor.”

On Wednesday in Madrid, however, Erdogan had set his objections aside, saying in a statement that his country had struck a deal with Finland and Sweden on NATO membership, according to reporting by euronews. The deal came after three hours of talks on Tuesday at the summit.

Erdogan said he had obtained “full cooperation” from Finland and Sweden against Kurdish PKK fighters and their allies.

The two Nordic countries had not as yet become members of the North Atlantic Treaty Organization, maintaining their longtime neutrality. But in the face of Russia’s ongoing war in Ukraine, both governments saw fit to quickly move their membership requests forward.

NATO countries at the summit formally invited Finland and Sweden to join the alliance after the agreement to end opposition with Türkiye was reached. Their accession, however, must be approved by all 30 NATO member states.