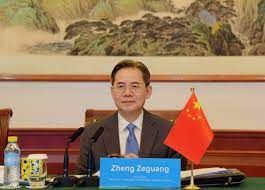 On July 8, 2022 local time, when attending the Group of Twenty (G20)  Foreign Ministers' Meeting on the Bali Island, State Councilor and Foreign Minister Wang Yi expounded on China's stance on food and energy  security, and put forward a cooperation initiative on global food  security on behalf of the Chinese side.
Wang Yi said, food and energy bear on the sound performance of the world  economy and the effective implementation of the 2030 Agenda for  Sustainable Development. Under the current situation, the G20 should  shoulder its due responsibility and establish a partnership on commodity  cooperation. The Chinese side would like to put forward the following  proposals:
First,  support the central role of the United Nations (UN) in coordination. The  role of the UN should be strengthened rather than weakened, and the  work of the Food and Agriculture Organization of the UN, the  International Fund for Agricultural Development, and the World Food  Programme (WFP) should be supported.
Second, not impose export restriction on humanitarian food purchases by the WFP.
Third, facilitate the entry of Russian, Ukrainian and Belarusian agricultural products and inputs into the international market.
Fourth,  major food-producing and net food-exporting countries should release  their own export potential, reduce trade and technical barriers, and  control making fuel out of crops, so as to ease the tight food supply in  the market.
Fifth,  emergency measures taken by countries for food trade should be  short-term, transparent, targeted and appropriate, and conform to the  rules of the World Trade Organization.
Sixth,  support the Consultative Group on International Agricultural Research  and the cooperation on agricultural science and technology innovation  among countries, and reduce restrictions on high-tech exchanges.
Seventh,  reduce food loss and waste. China has hosted the International  Conference on Food Loss and Waste and stands ready to jointly follow  through on the consensus reached at the conference.
Eighth,  help developing countries enhance their capacity for food production,  storage and loss reduction in terms of capital, technology, market and  others.