California wildfire rages on as US bakes in record-setting heat wave - ednews.net 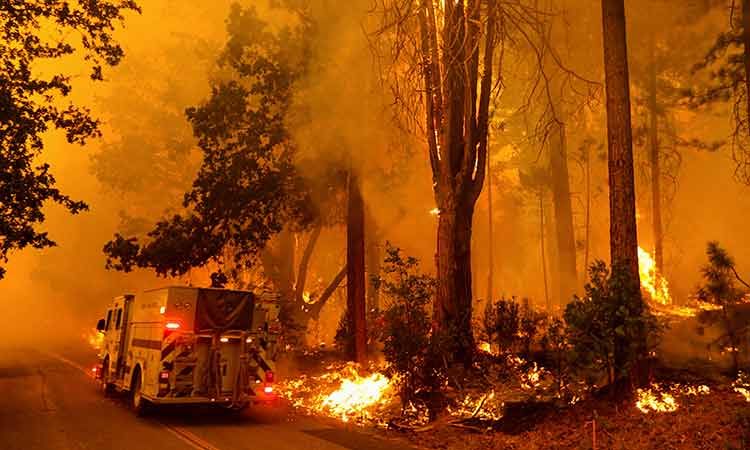 A California wildfire ripped through thousands of acres Saturday after being sparked a day earlier, as millions of Americans sweltered through scorching heat with already record-setting temperatures due to climb.
The heat wave encompassing multiple regions has increased the risk of blazes, such as the major Oak Fire, which broke out Friday in California near Yosemite National Park, where giant sequoias have already been threatened by flames in recent days.
The fire -- described as "explosive" by officials -- grew from about 600 acres to around 11,900 acres (4,800 hectares) within 24 hours. Concentrated in Mariposa County, it has already destroyed ten properties and damaged five others, with thousands more threatened.
More than 6,000 people had been evacuated, said Hector Vasquez, a California Department of Forestry and Fire Protection official, as the fire remained uncontained as of Saturday evening.
California-wildfire-July24-main2-750
A house is seen on fire as the Oak Fire burns near Darrah in Mariposa County, California, US, on Saturday. Reuters
The department said the fire's activity was "extreme."
California Governor Gavin Newsom on Saturday declared a "state of emergency" in Mariposa County, citing "conditions of extreme peril to the safety of persons and property."
The blaze left ashes, gutted vehicles and twisted remains of properties in its wake, as emergency personnel worked to evacuate residents and protect structures in its path.
More than 500 firefighters are working to extinguish the flames and are being assisted by aircraft, Vasquez said. Officials cited by the Los Angeles Times said it could take a week to contain.
"There's personnel showing up from various departments all over the state to help control this fire," Vasquez told AFP, saying the situation remained "really challenging."
Climate scientist Daniel Swain tweeted that the fire was "exhibiting consistently extreme behavior," while stunned social media users posted images of billowing plumes of smoke that reached thousands of feet into the air.
In recent years, California and other parts of the western United States have been ravaged by huge and fast-moving wildfires, driven by years of drought and a warming climate.
Drought and high temperatures have been "not in our favor," Vasquez said.