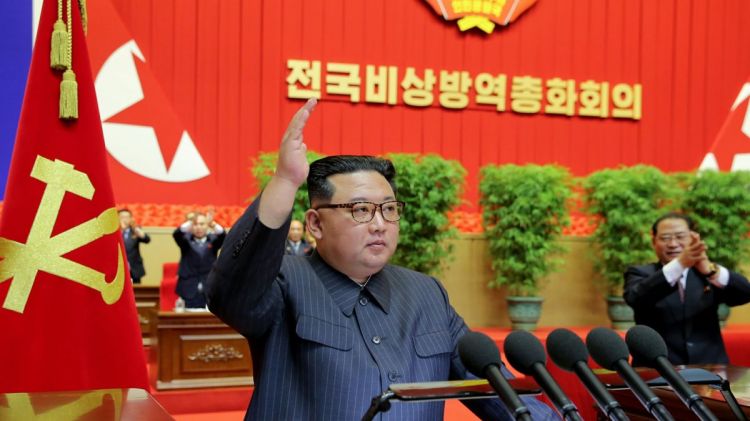 North Korea's Kim Jong-un suffered from "fever" during the Covid pandemic, his sister has said - in what appears to be the first suggestion he had the virus, Ednews reports citing BBC.

Kim Yo-jong also blamed South Korea for her country's outbreak - saying it sent leaflets contaminated with Covid across the border.

Ms Kim was speaking as her brother declared victory in the country's battle against Covid.

The secretive country announced its first Covid outbreak in May and has reported fever infections and deaths since. But there is widespread doubt over the data, especially the low number of deaths.

In her speech, Ms Kim - who is a powerful senior official - blamed South Korea for spreading Covid into the North by sending anti-Pyongyang leaflets across the border. Activists in South Korea have done this for decades, using balloons to float propaganda leaflets into the North, although the practice was banned last year.

Ms Kim called the sending of leaflets a "crime against humanity", and cited "the danger of spreading an infectious disease through contacting contaminated objects", according to state news agency KCNA.

She warned that North Korea was considering "a strong retaliatory response".

Also in her speech, Ms Kim spoke of her brother's health, saying: "Even though he was seriously ill with a high fever, he could not lie down for a moment thinking about the people he had to take care of until the end in the face of the anti-epidemic war."

North Korea refers to "fever" rather than coronavirus patients due to a lack of testing equipment.

Mr Kim meanwhile declared a "shining victory" over the virus and praised the "indomitable tenacity" of North Koreans, KCNA reported.

The North Korean leader ordered restrictions to be lifted and hailed the "miracle" of just 74 virus deaths.

North Korea has not reported any new suspected cases since 29 July - but international observers say the country has limited testing.

KCNA claims there have been 4.8 million infections since late April, but only 74 deaths, which is a fatality rate of 0.002% - the lowest in the world.

Many experts find these statistics hard to believe. They say the country has one of the world's worst healthcare systems with few intensive care units and no Covid treatment drugs or vaccines.

The country has not rolled out any vaccination programme during the pandemic, relying instead on lockdowns, homegrown treatments, and what Mr Kim has called the "advantageous Korean-style socialist system".