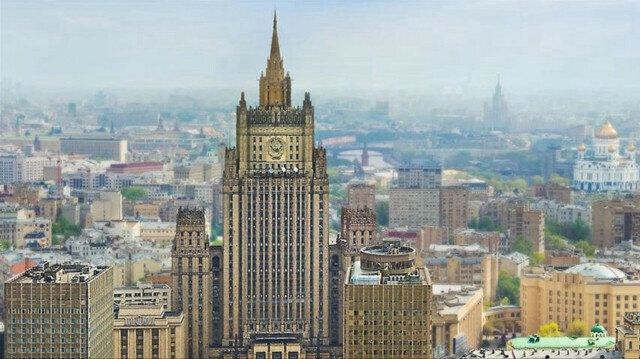 Russia on Thursday accused Kyiv on the "nuclear terrorism," claiming that Ukrainian shelling of the territory of the Zaporizhzhia Nuclear Power Plant could lead to a disaster worse than the notorious 1986 Chernobyl accident, Yeni Safak reports.

On Wednesday, the G-7 and EU voiced concern over the threats posed by Russia's possession of the Zaporizhzhia Nuclear Power Plant, urging Moscow to hand over the war-torn country's nuclear facilities to the government in Kyiv.

On March 4, the Russian forces captured the facility with key strategical importance after they attacked Ukraine on Feb. 24.

Ivan Nechaev, a Foreign Ministry spokesperson, said reports about the proposal of the Democratic People's Republic of Korea to send its volunteers to participate in Russia's "special operation" in Ukraine is fake, adding that no such negotiations are ongoing.

Nechaev also said the calls of a number of countries to stop issuing Schengen visas to Russians is "an open manifestation of chauvinism."

"Switzerland, having joined the sanctions, has lost the status of a neutral state, therefore it cannot represent the interests of Kyiv in the Russian Federation," he told the reporters.

On Wednesday, Ukrainian Foreign Ministry spokesman Oleh Nikolenko said his country reached an agreement in principle with Switzerland on the representation of Ukrainian interests in the territory of Russia.

He also underlined that the recent US decision to allocate another package of military assistance to Kyiv "only delays the fighting."