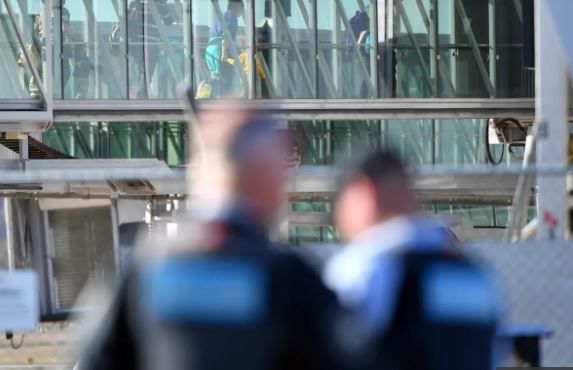 Police preparing to give a statement on events at Canberra airport
Witnesses have reported hearing “8 to 10” gunshots, after a potential shooting incident at Canberra airport this afternoon.
A large contingent of police have blocked off Canberra airport, with armed AFP officers barring the doors. At least a dozen police vehicles are stationed at the airport, with all visitors evacuated from the terminal. Hundreds of people are gathered waiting outside the building.
One family told Guardian Australia they heard shooting near the Qantas terminal, claiming up to 10 shots were fired.
“They told us “run, run”. It was very scary,” one man, who declined to give his name, said.
Canberra police have confirmed an incident at the city’s airport, but won’t confirm exactly what has happened or whether any arrests have been made. Police have said a statement will be issued shortly.
People waiting on planes at Canberra airport after reports of gunshots
More details are emerging of people being held on planes as police work to respond to the development at Canberra airport.
Guardian Australia is still working to confirm with police that gunshots were fired at the airport.