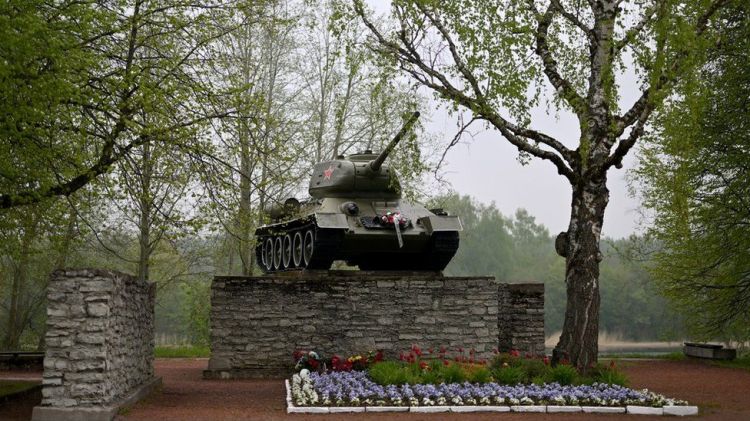 The move is aimed at preventing them "from mobilising more hostility in society and tearing open old wounds" following Russia's invasion of Ukraine, the government said.

An iconic T-34 tank in the city of Narva, which borders Russia, was being taken to the Estonian War Museum.

Narva is Estonia's third biggest city, where 97% of its population of about 60,000 people speak Russian.

The replica tank was taken from a plinth on Tuesday morning and loaded on to a military trailer ahead of its journey 200km (125 miles) to the west, public broadcaster ERR reported. Authorities said they were restricting public access to the area around the tank as well as other local monuments.

Russia's war in Ukraine is stirring tension in Narva in particular, Estonia fears.

In her statement, Prime Minister Kaja Kallas said her government would not "afford Russia the opportunity to use the past to disturb the peace in Estonia".

"Considering the speed of the increasing tensions and confusion around memorials in Narva, we must act quickly to ensure public order and internal security."

Foreign Minister Urmas Reinsalu said such monuments had been erected to glorify Russian occupation and had no place in Estonia's public space.

Apart from the T-34 tank, the World War Two cemetery will also be relocated with "a neutral grave marker" - an issue that the government acknowledges may create tensions.

"The war against history, moreover with a common history and the disposal of monuments for those who saved Europe from fascism, is of course outrageous," President Vladimir Putin's spokesman said.

"We have to admit that Russian society, by and large, also bears a passive moral responsibility for these atrocities, which take place in Ukrainian soil," Mr Reinsalu said.

Latvia, Lithuania and the Czech Republic have also largely stopped issuing visas to Russians. Finland is reducing to 10% the number of visas it issues to Russians.