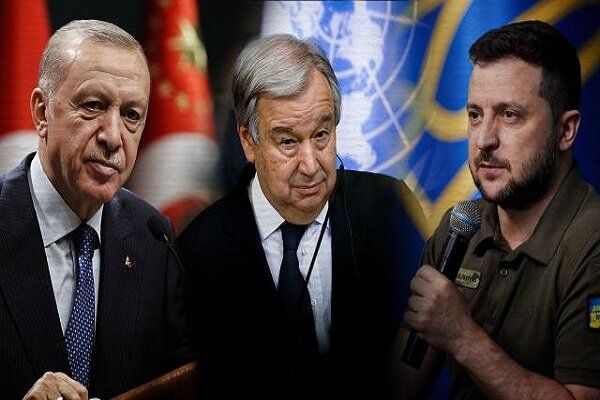 Ukrainian President Volodymyr Zelenskiy said he agreed the parameters of a mission of the International Atomic Energy Agency to the Zaporizhzhia nuclear plant at talks on Thursday with the U.N. secretary-general and Turkey's leader, Ednews reports citing News.az.

Zelenskiy told a news conference after the talks in the western Ukrainian city of Lviv that Russia should immediately withdraw its forces and stop shelling from the nuclear power plant in southern Ukraine.

As the Ukrainian leader held talks with Turkish President Tayyip Erdogan and U.N. Secretary General Antonio Guterres, Kyiv and Moscow accused each other of planning to stage a "provocation" at the plant in Zaporizhzhia.

Fears have mounted of the risk of a Chornobyl-style nuclear disaster as Kyiv and Moscow have blamed each other for shelling the Russian-controlled facility, prompting calls for an IAEA mission to the plant.

"We agreed with the secretary general the conditions of a possible mission by the IAEA to the Zaporizhzhia nuclear plant, in a legal way, via territory free from occupiers," Zelenskiy told reporters.

"Russia should immediately and unconditionally withdraw its forces from territory of Zaporizhzhia nuclear power plant, as well as stopping any provocations and shelling," he said.

The leaders hailed the success of a U.N.-brokered agreement allowing the passage of ships from three Ukrainian Black Sea ports, and said they discussed ways to improve the deal. Erdogan said positive momentum from the deal could provide the basis for talks on ending the war.

The crowded news conference lasted nearly an hour, with the three leaders and well over 100 journalists straining in the heat.