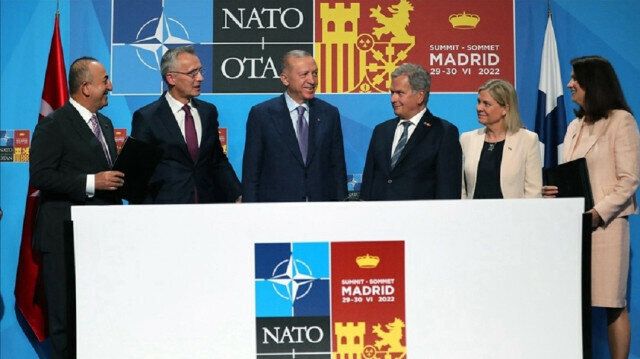 Türkiye, Sweden, and Finland continue to talk about the two Scandinavian countries' NATO bid, said a Swedish daily on Tuesday in reference to the meeting held between the three countries on Sept.2, Edneüs reports citing Yeni Safak.

The Turkish delegation argued that Sweden has not fulfilled what the countries agreed upon in the settlement during the NATO summit held in Madrid in June, said the Swedish daily Aftonbladet, citing Swedish officials.

The daily added that the Turkish delegation also showed photographs from demonstrations in Sweden where terrorist group PKK's flags were waved.

"The meeting was constructive and was held in a good spirit, but the Turkish delegation continued to criticize several points which the Swedish side partly thinks are incorrect. Therefore, these meetings have been partly about clearing up misunderstandings," told the officials daily.

Türkiye gave no information whatsoever about when the country might approve Sweden's and Finland's NATO applications, the daily reported.
In May, Sweden and Finland formally applied to join NATO, a decision spurred by Russia's war on Ukraine.

However, Türkiye, a NATO member for more than 70 years, opposed the two countries' membership aspirations due to their tolerance and even backing for terrorist groups, including PKK and FETO.

In its more than 35-year terror campaign against Türkiye, the PKK -- listed as a terrorist organization by Türkiye, the US, EU, and the UK -- has been responsible for the deaths of more than 40,000 people, including women, children, and infants.

Ankara accuses FETO of being behind a long-running campaign to overthrow the state by infiltrating Turkish institutions, particularly the military, police, and judiciary.

On June 28, the trio signed a trilateral memorandum at the NATO summit in Madrid to address Türkiye's legitimate security concerns, paving the way for Finland and Sweden's NATO membership.