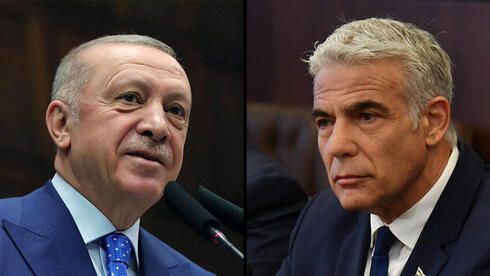 Israeli Prime Minister Yair Lapid is to meet Turkish President Recep Tayyip Erdogan on the sidelines of the UN General Assembly on Tuesday, as relations between the two countries thaw, YNetnews reports.

A source said the meeting with Erdogan would take place on Tuesday. It came as Israel's army chief Lieutenant General Aviv Kochavi announced his first visit to France and Poland to meet with senior officials in the two countries.
Last month, Turkey and Israel announced the full restoration of diplomatic ties following years of strained relations.
In May, Mevlut Cavusoglu became the first Turkish foreign minister to visit Israel in 15 years.
Erdogan described a fence-mending visit to Ankara by Israeli President Isaac Herzog in March as "a turning point in our relations.”
Relations began to fray in 2008, following an Israeli military operation in Gaza.
Relations then froze in 2010 after the deaths of 10 civilians following an Israeli commando raid on the Turkish ship Mavi Marmara, part of an aid flotilla trying to breach the Israeli blockade on Gaza.
A brief reconciliation lasted from 2016 until 2018, when Turkey withdrew its ambassador and expelled Israel's over border protests along the Gaza border.
Israel’s army said the “mass riots" were led by Gaza's ruling faction Hamas. At least 215 Palestinians were killed after the military fired on the demonstrators, many of them unarmed, and hundreds were wounded, according to Gaza’s Al-Mezan Center for Human Rights.
A soldier from Israel’s military was also killed by a Palestinian sniper during the protests, and several other Israelis were wounded.