Political process in Iraq to lead to formation of strong gov. - ednews.net

Political process in Iraq to lead to formation of strong gov. 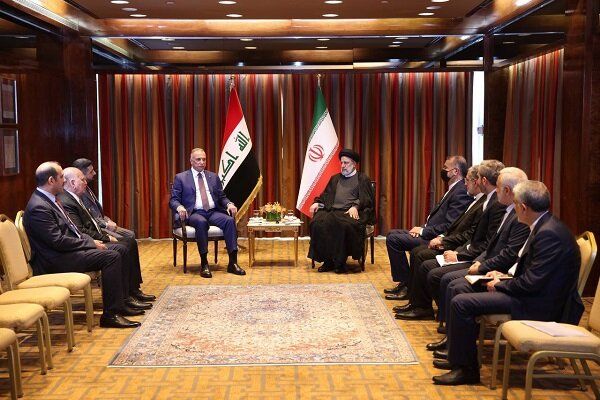 Iranian President expressed hope that the understanding of the Iraqi parties and the acceleration of the political process will lead to the formation of a powerful government in Iraq, Mehr news reports.

On the second day of his trip to New York, Ebrahim Raeisi met Iraqi Prime Minister Mustafa Al-Kadhimi, expressing the sincere gratitude of the Leader of the Islamic Revolution and the government of Iran to the government and people of Iraq for the hosting and magnificent holding of this year's Arba'een ceremony.

"We hope that the political process in Iraq will lead to the formation of a powerful government with understanding and dialogue as soon as possible".

Raeisi also referred to the words of the Prime Minister of Iraq about the need to speed up the completion of the Basra to Shlamcheh railway project and stated, "Removing the small knot of this project and completing it faster will result in huge results and achievements in the expansion of bilateral interactions and cooperation as well as facilitating the movement of pilgrims to holy places in the two countries."

The President further expressed hope that the political process of the Iraqi parliamentary elections will be concluded as soon as possible with the dialogue and understanding of the Iraqi parties and a strong and powerful government will be formed.

Raeisi continued by appreciating the goodwill and efforts of the Iraqi government and the Prime Minister himself to improve the relations between the countries of the region, including Iran and Saudi Arabia, and stated, "The Islamic Republic of Iran welcomes the improvement of relations with Saudi Arabia, but we insist that this process should proceed based on the agreements and understandings made in the talks between the officials of the two countries in Iraq."

The President pointed out that the Islamic Republic of Iran has always considered the interests of the Islamic Ummah in its regional relations.

In this meeting, Iraqi Prime Minister Mustafa Al-Kadhimi also expressed his gratitude for the satisfaction of the Iranian authorities and people for the hospitality of the Iraqi people to visit Imam Hussein's (AS) tomb and said, "The people of Iraq have only fulfilled their duty towards the pilgrims of Imam Hussein (AS)."

By presenting a report on the latest political situation in his country, the Prime Minister of Iraq appreciated the goodwill and efforts of the government of the Islamic Republic of Iran to increase cooperation with Iraq.